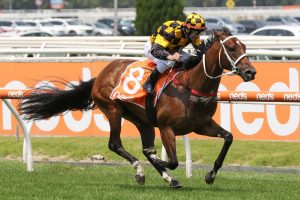 Letzbeglam is in from $101 to $12 to win the Blue Diamond after her upset Prelude victory. Photo: Ultimate Racing Photos.

A well-bred daughter of Snitzel, Letzbeglam was a $280,000 buy from the Magic Millions sales and came into Saturday’s Prelude race on the back of an eye-catching win on debut at Werribee on January 21.

She won that race by two lengths and had another big margin to spare on her rivals second-up in tougher company with Brett Prebble continuing his association.

Prebble previously won the Blue Diamond Prelude (Fillies) race back in 2001 on the John Hawkes-trained Faiza and was back in the winner’s stall nearly two decades later aboard Letzbeglam.

The punters had heavily backed Team Snowden’s Blue Diamond Preview runner-up Fresh to win the Prelude with the daughter of Fastnet Rock jumping the $2.90 favourite in betting.

Fresh showed plenty of toe early driving through on the fence to settle second to the leader, her stablemate Diamondesque leading the field around.

After jumping well from the wide alley, Letzbeglam raced third on the outside of the top fancy doing plenty of work facing the breeze wide without cover.

Once round the turn, Letzbeglam ($31) showed brilliant acceleration hitting the front at the 200m mark flying home for an easy 2.5 length victory over the returning Ciaron Maher & David Eustace-trained Muntaseera ($3.30).

In third right on the heels of the runner-up was the improving Geist ($16), sixth in the Preview, for James Cummings and the Godolphin stable who was four-deep onto the straight.

As for Fresh, she dropped out in the final furlong eventually fading to finish last.

Prebble was thrilled to deliver on the underrated Letzbeglam giving the veteran hoop a livewire hope for the Group 1 $1.5 million Neds Blue Diamond Stakes (1200m) on February 22.

“She’s a good filly, she’s obviously going to get better with age…she’s just learning,” he said.

“She’s got lovely scope and she’s going to get over further.

“I thought it would just be another stepping-stone today, but she’s come out and raised the bar and has shown us how good she is.

“Credit to her, she did it the hard way (facing the breeze).”

Following her victory, Letzbeglam firmed in from $101 to $12 in the pre-field 2020 Blue Diamond Stakes odds at Ladbrokes.com.au and co-trainer Young said the team would be taking good care of her ahead of the big race.

“She’ll be getting the cotton wool on her as soon as we get her home!” Young joked.

“We were a little bit hesitant about the (wide) draw today…she was three-deep without cover.

“The Snitzel came out in her then, she’s a well-bred filly.”