Peter & Paul Snowden‘s class filly Anaheed looks on track for the Group 1 Oakleigh Plate back at Caulfield on Blue Diamond Day following her explosive win in the 2020 Rubiton Stakes. 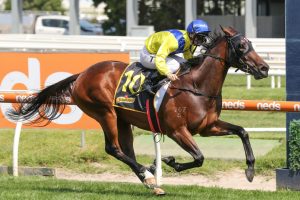 The progressive three-year-old daughter of Fastnet Rock jumped favourite fresh in the Group 2 $200,000 Rubiton Stakes (1100m) having her first run since the third behind Loving Gaby at The Valley last October in the Group 1 Ladbrokes Manikato Stakes (1200m).

She continued her nice form at the Caulfield track where she had early won the Group 3 Blue Sapphire Stakes (1200m) charging home ahead of the older sprinters carrying 54kg to victory with Tim Clark in the saddle.

Anaheed relaxed nicely in the run, given a perfect ride from Clark who let the leader come across, allowing his mount to settle before pushing the button when needed.

It was Sartorial Splendor from the outside alley who mustered up the speed early to lead from Anaheed, while Age Of Chivalry raced third on the outside of Runson.

On the turn the high-cruising front runner retained the lead with Clark biding his time on the favourite.

At the 200m, Anaheed ($2.90) joined Sartorial Splendor before letting home and bolting home with a big space on the line between her and runner-up Bold Star ($9) who flashed home late down the outside.

All Too Royal ($8.50) from the in-form stables of Ciaron Maher & David Eustace rounded out the Rubiton Stakes trifecta in third.

Bred to be a star, Anaheed looks to have a super autumn three-year-old campaign ahead as she looks to emulate the success of her sire.

“I’ve got a real soft spot for her. I’ve ridden her a fair bit from very early on, very genuine little filly, gives her all,” Clark said after the race.

“There’s improvement to come from her, she’s just a proper racehorse.

“Hopefully one day she can breakthrough (for a Group 1 win). Hopefully it’s in a couple of weeks back here.

“It’s good to see her return in such good order. She seems to like racing here at Caulfield.

“She worked across to stalk the leader and she put him to bed pretty quickly and was strong through the line.

“1200 (m) is her sweet spot. It was good to see her do that on dry ground too…bit more mature now and handling everything a bit better.”

Co-trainer Peter Snowden was quick to rule out a Group 1 $1.25 million Newmarket Handicap (1200m) run down the Flemington straight on Super Saturday (March 7), but confirmed plans to return to Caulfield on February 22 for a shot at the Group 1 $500,000 Neds Oakleigh Plate (1100m).

“She has been tremendous for us,” he said.

“I was really surprised by how well she’s won…she showed a real class today and probably only 90% there and so really happy with that effort.

“Caulfield’s a great track for her and there’s a nice race coming up in a couple of weeks that might just suit her as well.

“She was good at two, but no signs of her training off and that’s a great return today.

“She ran time and did it comfortably.

“I wouldn’t say the Newmarket, but the Oakleigh back at Caulfield in the handicap she gets nothing and surely she has to be a lightweight chance in a race like that.”

The Snowdens are chasing their second Oakleigh Plate in three years following their 2018 success with Russian Revolution, while the fillies were successful last year with Booker (2019) beating home her older rivals with the lightweight.

Anaheed has firmed in from $14 to $6 in the all-in Oakleigh Plate 2020 odds online at Ladbrokes.com.au – available here.