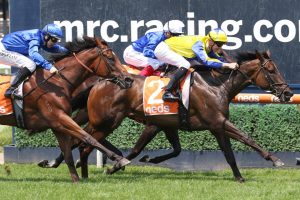 How Womantic continued her unbeaten run with a win in the 2020 Kevin Hayes Stakes. Photo: Ultimate Racing Photos.

A lovely filly by the immensely talented but ill-fated The Wow Signal from the Starspangledbanner line, How Womantic was a bargain buy for $50,000 by Brad Spicer at the sales and has now won all four of her starts this season in her first preparation.

She was the easing favourite for her Black-Type debut in the Kevin Hayes Stakes out to $3.90 at Ladbrokes.com.au by the jump.

How Womantic won her last start at The Valley on January 24 from barrier two taking out the $150,000 VOBIS Gold Carat (1200m) by 1.75 lengths and she was blessed with the same near-the-inside alley on Saturday.

Smart young hoop Jye McNeil continued his successful association with the Group 1-bound filly riding her for a hat-trick of wins.

McNeil had the still-green favourite settled third near the fence as the field was led around by Godolphin’s last start Rosehill winning Exceed And Excel filly Enfleurage.

Along the rails, Enfleurage was still leading at the 200m with Satin Socks out wide with no cover on her tail and How Womantic charging up through the middle trying to pick her up.

Inside the final 50m, How Womantic dug in and took the lead beating Enfleurage ($11) by a quarter-length with the other James Cummings-trained runner Aquitaine ($5.50) rounding out the tight trifecta in third.

The Group 3 victory proved the raw ability of How Womantic who floated at times and didn’t really know how to put her rivals away.

She was still able to impress with another win thanks to her race fitness, class and a lovely ride by McNeil who made those on the outside of him work and stay off the fence giving him the clear run to the line.

“Obviously there was a little bit of hype around this horse,” McNeil said post-win.

“I just really love her. She’s the perfect little racehorse. She’s so switched off…relaxed and composed and that’s going to take her a long way in her career.

“I think the inside barrier was the difference for us today…she was just able to hold her position comfortably, we were able to dictate, and she really fought off the challengers over the final stages.

Co-trainer Eustace was thrilled with the Kevin Hayes Stakes result and said there was plenty left to come from How Womantic.

“She’s still working things out a little bit just when she’s asked to quicken…but she doesn’t just go bang straight away, that’s till just a bit of greenness.

“She’s got a wonderful attitude…I think there is still more to come as she’s still just working things out.

“Hopefully she can continue onto some big targets now in mind for her.

“We might stretch her out in trip now, it’s something we can think about.”