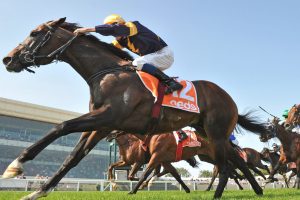 Moroney celebrated his official 50th elite level success as a trainer at Caulfield on Saturday thanks to the powerhouse win from Alabama Express who beat home the older horses at weight-for-age in the Group 1 $500,000 Neds C.F. Orr Stakes (1400m).

It was the same race his father Redoute’s Choice claimed back in 2000 and earned the up-and-comer another shot down the straight six at HQ on March 7 in the Group 1 $1.25 million Newmarket Handicap (1200m).

Alabama Express became the seventh three-year-old to win the C.F. Orr Stakes and the first since All Too Hard (2013).

“That is officially now number 50 (Group 1 wins) and to get it with a horse like this in a race like this is terrific,” Moroney said.

“The horse has come back better and stronger. He’s really become professional now.

“He’s just a lovely colt. He looks more like his dad (Redoute’s Choice) than any other horse I’ve seen.

The youngster overcame the hoodoo of horses that are neither racing first-up or coming off a Group 2 Australia Stakes run at The Valley, winning the CF Orr on the back of a two-length victory at Flemington on January 18.

The gun colt carried 58.5kg to victory in that three-years-old handicap and relished the drop back to 55.5kg on Saturday with Michael Dee retaining the ride.

Alabama Express was positive out of the gates for Dee but was taken wide racing off the track in fourth with no cover facing the breeze the whole way in a field full of older Group 1 winners.

“All credit goes down to this tough bloke, he did it tough three deep wide with no cover,” Dee said after the win.

“I didn’t have the pace to get right up there but that makes it for an even better effort (from the horse).”

It was Hey Doc who began best and was taken straight to the lead from Begood Toya Mother, while the Australia Stakes winner and hot favourite Scales Of Justice was three wide getting the cold sit third right behind the front runners.

Around the turn Begood Toya Mother joined Hey Doc, but once on the straight Dee got going launching Alabama Express down the outside.

The eventual $11 winner hit the lead 150m out and charged home to beat home Matthew Smith’s two-time Group 1 champ Fierce Impact ($8) narrowly, the runner-up a touch unlucky having to come out and go around Alabama Express.

In third rounding out tight CF Orr Stakes trifecta only a quarter-length off the winner was the Chris Waller-trained Kings Will Dream ($16).

Moroney is now keen to give Alabama Express the chance to atone for his luckless seventh behind Exceedance in last November’s Group 1 Coolmore Stud Stakes (1200m) with the horse to return to the track and distance for the Newmarket Handicap 2020.

“He is (a quality colt), he got the toughest run of the race and still won,” Moroney said.

“He’s that good that he did what he did.

“He is a very valuable colt, we’re well aware of that.

“Maybe a run in a Newmarket or something like that now, he’s got that bit of speed.”

Following his CF Orr Stakes victory, Alabama Express has firmed in from $17 to $10 in pre-field Newmarket Handicap odds at Ladbrokes.com.au – available here.