Gerald Ryan’s progressive colt Standout has stood up to the older horses at weight-for-age fresh with a barnstorming win over the favourite Alizee in Saturday’s Expressway Stakes 2020 results at Randwick. 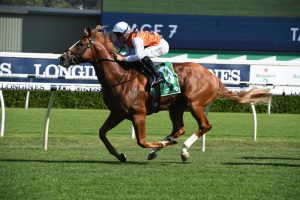 Standout was far too good for the older horses at WFA in the 2020 Expressway Stakes results. Photo: Steve Hart.

The three-year-old son of Exceed And Excel was given an acid test first-up against a class field in the Group 2 $200,000 Expressway Stakes (1200m) at just his second career prep.

Last time in he won his opening three starts including the Listed Heritage Stakes (1100m) before his second in the Group 2 Roman Consul Stakes (1200m).

After two encouraging trials in January, Ryan decided to roll the dice in the Expressway Stakes instead of keeping Standout against his own age.

It proved the winning move with the youngster taking his record up to four wins from five starts and opening up the Group 1 possibilities over the Sydney Autumn Racing Carnival.

“I think the way he won that…the way the horse switched off, you could aim him at anything,”

“We gave him time…he’s just going beautiful. He’s always shown that he’s had that Group 1 ability.

“He hasn’t got there yet but he’s certainly going to have a crack at them this autumn.”

Standout switched off beautifully for Tommy Berry in the run settling fourth as the well-backed Irithea led the Expressway Stakes field around.

Last year’s winner and the short-priced favourite 12 months on, Godolphin-raced Sepoy mare Alizee meanwhile was parked last on the fence.

Eventually fading to finish last with only three lengths separating first to seventh, Irithea led into the turn with White Moss on her outside.

Standout though was cruising into the race down the outside, the colt making his move at the 200m and drawing clear.

Alizee ($1.90) gave chase but couldn’t match the fast-finishing three-year-old with Standout ($7.50) boasting one and a half lengths over the beaten odds-on favourite on the line, while White Moss ($14) ran third.

Ryan celebrated his second Expressway Stakes victory in just three years having previously won the event in 2018 with Trapeze Artist.

Trapeze Artist went on to run third in that year’s Group 1 Randwick Guineas (1600m) before taking out the Group 1 TJ Smith Stakes (1200m) – Group 1 All Aged Stakes (1400m) double at Randwick during April.

All those races remain on the cards for the untapped Standout in 2020 who Ryan said was likely to target the Group 1 $500,000 Canterbury Stakes (1300m) back at Randwick on March 7.

“Today was going to be, if he measured up, a preparation aiming towards the spring races at weight-for-age,” Ryan said.

“With fifty-five and a half kilos he’s carrying only about a tenth of his body weight.

“A race like the Canterbury Stakes could be on the agenda.

“The TJ and those races we won with Melito and Trapeze Artist as three-year-olds.

“Certainly, the better sprinters are going to come back, these aren’t A-grade sprinters he’s beaten…but it’s only his fifth start.”