Trainer Gerald Ryan is confident his smart colt Standout is up to the challenge of a weight-for-age clash first-up against star mare Alizee in this Saturday’s 2020 Expressway Stakes. 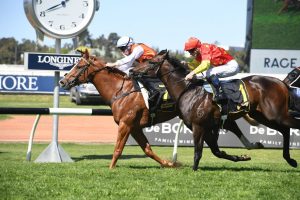 Standout steps up to WFA for the first time in Saturday’s 2020 Expressway Stakes at Rosehill. Photo: Steve Hart.

The Godolphin-raced defending champion Alizee is currently odds-on favourite in pre-field markets at Ladbrokes.com.au to defeat a small field in the Group 2 $200,000 Expressway Stakes (1200m) at Rosehill Gardens.

Despite the dominance in Expressway Stakes betting for the three-time Group 1 winning daughter of Sepoy, Ryan rates his three-year-old son of Exceed And Excel a genuine winning hope in his first weight-for-age test.

The lightly-raced chestnut has had four career starts to date for a trio of wins and a second-place effort.

His highest rated win was at the Rosehill track last September when he narrowly defeated Cosmic Force in the Listed Heritage Stakes (1100m).

Since then Ryan has brought Standout on fitness wise for his first-up assignment with two January hitouts in Sydney that produced a Rosehill win over 900m and a second at Randwick over the same distance behind Dreamforce.

“He gives the indication that he is a good horse it is just a matter of if he is up to weight-for-age level at his fifth start in a race,” Ryan told Racenet this week.

“I know Trapeze Artist won this race [in 2018] but he had five starts as a two-year-old and four starts in the spring so it was his 10th or 11th start.

“This horse is heading there at his fifth start in a race and it is not as if he has had heaps of trials.

“He has only had three trials, I think. He is learning and he is happy so we will get a good guide on where he is after Saturday.

“He is going good.

“His two trials have been good and he has come through those well. It is a different league on Saturday stepping up to weight-for-age but he is going good then just have to decide where to aim him after Saturday.”

The latest all-in Expressway Stakes odds have Standout at $4.80 just behind Kubrick ($3.60).

“He is a big solid horse,” Ryan added.

“He is a lovely individual to look at and has the colour to go with it.

“He is a big strong horse and I am hopeful he can measure up on Saturday.”

After Racing NSW extended the nominations, a further four horses have been added to the potential line-up including Alizee’s Golden Slipper winning stablemate Kiamichi.