The all-in 2020 Australian Guineas odds on Kiwi galloper Catalyst have firmed following the gun three-year-old’s successful return at home on Saturday at Ellerslie. 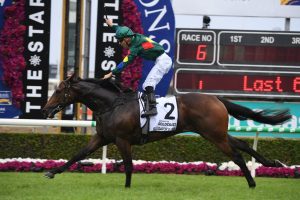 The Clayton Chipperfield-trained Darci Brahma gelding took his record up to six wins from seven starts, the young star undefeated going back to May last year after extending his winning streak first-up in the Henley Park Mr Tiz Trophy (1200m).

Ridden again by Troy Harris, Catalyst gave connections a scare in his first run back since winning the Group 1 New Zealand 2000 Guineas (1600m) over the mile at Riccarton Park last November.

Slow out the gates, the hot horse in the race sat back in last with plenty of work still to do at the top of the straight.

Harris remained calm, confident he had plenty of motor under him, allowing Catalyst to work through the gears and into the race at the 600 metres.

The favourite came underneath, presented in the centre of the track once on the straight in a perfectly timed performance picking up his rivals and putting them to bed in a bolting finish ahead of Run To Perfection (2nd) and Bavella (3rd).

“I didn’t panic at all,” Harris said post-win.

“I know he’s got a good turn of foot. I was always confident he was going to pick them up.

“He’s had a decent blow, so he’s probably got another two lengths in him at least.

“It’s more excitement than anything. It’s good to go there and get the job done.

“Hopefully now we can go to Aussie and get them in.”

Harris may have been calm, but Chipperfield admitted he thought the winning streak was over.

“I thought we were in a whole heap of trouble,” the Te Awamutu horseman said.

“What a turn of foot he’s got. So impressive.

“He still had plenty to do at the top of the straight…the amount of ground he made up in such a short amount of time, that’s unbelievable that is.”

Back in December Chipperfield declared both the Group 1 $1 million Australian Guineas (1600m) at Flemington on February 29 and the $5 million The All-Star Mile (1600) at Caulfield on March 14 as down under targets for his exciting galloper.

New Zealand racing fans are this year included in The All-Star Mile voting and Harris was quick to shout-out an appeal for votes after the first-up win on Catalyst.

Chipperfield believes Catalyst certainly can be competitive in Melbourne during the autumn but said the hood would be going back on to ensure his stable ace didn’t miss the kick again.

“We can’t be pulling out the gates like that in Australia,” he said.

“He’s given so many lengths to catch up [today]. He’s got to be competitive if we put that hood on and he can bounce out of the gates.”

Catalyst has firmed in from $5 to $4.60 occupying the second line of the markets following his resuming victory.

All Star Mile betting is also led by Alligator Blood ($7), while Catalyst pays $9 in a tightly bunched market for the Special Conditions feature.

The New Zealander’s Australian owner Dick Karreman last year turned down a $2.5 million offer to sell Catalyst before the horse had even win the NZ 2000 Guineas.

Owner of The Oaks Stud who celebrated his greatest turf success with the champion mare Seachange, Karreman was trackside for the boom three-year-old’s return.

“He is a serious, serious horse but he can’t afford to miss the start against the Aussies that’s for sure,” he said.