Tony & Calvin McEvoy’s last start Winterbottom Stakes winner Hey Doc is tipped to win his racing return under the lights at The Valley tonight sitting top of the Australia Stakes 2020 field and odds. 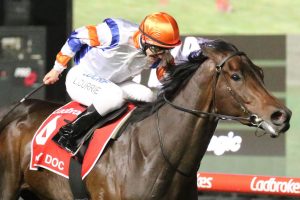 Hey Doc is favourite to win the 2020 Australia Stakes under the lights at The Valley. Photo: Ultimate Racing Photos.

There are just eight sprinters left in the mix for this season’s Group 2 $200,000 Australia Stakes (1200m) following the early scratching of the Clare Cunningham-trained Cradle Mountain (8).

With just seven rivals and the rails run from barrier one, Duporth six-year-old Hey Doc is into $2.45 in the latest Australia Stakes betting markets at Ladbrokes.com.au.

The galloper is a specialist at the notoriously tight Moonee Valley circuit having won three of his four starts at the track including the 2017 Group 1 Manikato Stakes (1200m).

The comeback sprinter had an injury-enforced year on the sidelines but returned last November in top form winning the Group 1 Winterbottom Stakes (1200m) in Perth second-up.

Luke Currie is booked to ride this year’s Australia Stakes favourite, the hoop after his second win in the event following his earlier success on the Stephen Brown-trained Sea Lord (2013).

Co-trainer Tony McEvoy is full of pre-race confidence with Hey Doc and is confident the horse can either lead or box seat depending on what his rivals dish up on the night.

“Our horse has won an Australian Guineas sitting in the box (seat) and he’s won a Manikato leading,” he told RSN.

“So, they will know we will be riding our horse normally.

“If they want to take us on, then I wish them well.

“Around The Valley which he loves, drawn the poll, he will take a lot of beating.”

McEvoy is eying one more run down under for Hey Doc, potentially in the Group 1 CF Orr Stakes (1400m) at Caulfield on February 8, before his Dubai World Cup Carnival bid in March targeting the Al Quoz Sprint (1200m).

Following closely in the Australia Stakes odds at $3.90 is the market mover, Lindsey Smith’s veteran Scales Of Justice in gate two with Dean Yendall in the saddle.

Winner of the 2016 Group 1 Railway Stakes in WA, Scales Of Justice broke his Group 1 drought last August with a good win at Caulfield in the Group 1 Memsie Stakes (1400m).

The seven-year-old was last seen running two lengths back fifth to Gatting in Flemington’s Group 1 Makybe Diva Stakes (1600m) back in September.

Scales Of Justice has an excellent first-up record with three wins, four seconds and a third from nine resuming runs that he will be looking to add to in the Australia Stakes having his first look at the Moonee Valley track.

In an open affair two other runners are also under $10 for the win with Begood Toya Mother ($5) and the Godolphin-raced Microphone ($5.50).

Begood Toya Mother is also yet to race at The Valley and runs for the first time since his Caulfield win in last September’s Group 1 Sir Rupert Clarke Stakes (1400m).

While the five-year-old does race well fresh, in the Sir Rupert Begood Toya Mother carried just 52kg to victory and goes up to 58.5kg at weight-for-age in the Australia Stakes.

The James Cummings-trained Microphone in barrier five is the sole three-year-old in the mix, the Exceed And Excel colt last seen placing third in the Group 2 Roman Consul Stakes (1200m) at Randwick back in October.

Prior to that the classy youngster beat home subsequent Manikato Stakes winning filly Loving Gaby home to win the Group 1 ATC Sires’ Produce Stakes (1400m) on the back of a Golden Slipper second during a huge autumn in Sydney.