The lead-up to the $1.5 million Group 1 Neds Blue Diamond Stakes (1200m) kicks up a gear this weekend with Caulfield host to the two Blue Diamond Preview races where Hanseatic and Fresh are the favourites to win. 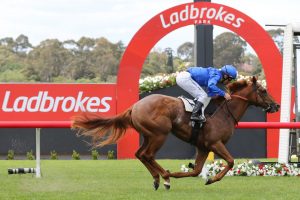 Hanseatic is tipped to win the 2020 Blue Diamond Preview for colts and geldings at Caulfield on Saturday. Photo: Ultimate Racing Photos.

In the race for colts and geldings the Anthony Freedman-trained Hanseatic is the firm $2.60 favourite through Ladbrokes.com.au following his impressive win on debut at Sandown in November.

The Street Boss colt is also the current $10 all-in favourite in 2020 Blue Diamond Stakes betting at Ladbrokes.com.au after the form of his Black-Type Zipping Classic Day win was franked on Magic Millions Day.

During the spring Hanseatic defeated a field of fellow two-year-olds in the Listed Merson Cooper Stakes (1000m) including the fourth placed filly Away Game.

The Ciaron Maher & David Eustace-trained Away Game has subsequently won her following two starts taking out Doomben’s Listed Calaway Gal Stakes (1100m) and the $2 million Magic Millions 2YO Classic (1200m) on the Gold Coast earlier in the month.

Freedman won the Blue Diamond Preview (C&G) last year with I Am Immortal and so chases back-to-back wins this weekend with Hanseatic needing a touch of luck from the outside barrier 12 of 12 draw.

The most likely to stop Hanseatic from recording a two-from-two start to his career occupying the second line of Blue Diamond Preview betting for the colts and geldings at $3.50 is Tanker.

A stablemate to Magic Millions Classic winner Away Game, Pride Of Dubai colt has his third career start on Saturday.

First-up last October he caught the eye with a two and a quarter length win in Caulfield’s Listed Debutant Stakes (1000m) before running fifth to Dame Giselle in the $1 million Golden Gift (1100m) at Rosehill in November.

Tanker is drawn better with barrier six and will be ridden by Mark Zahra who rode that year’s subsequent Blue Diamond Stakes champion Sepoy to victory in the race back in 2011.

The only other two-year-old in the Blue Diamond C&G Preview under $10 for the win is the Lindsay Park-trained Fixated ($7.50) on debut.

A well-bred son of Hinchinbrook, Fixated debuts without a previous trial but the bookies are taking no chances based on the pedigree and stable.

The Blue Diamond Fillies Preview field is down to 15 following two early scratchings with the Peter & Paul Snowden-trained Fresh drawn wide (13) but still tipped to win.

She raced for the first time on January 2 at Geelong and blitzed her rivals by three lengths over 1125m ahead of her Black-Type debut this Saturday.

Fresh pays $3.20 in Blue Diamond Preview betting on the fillies’ edition and is rated a $14 hope in the Blue Diamond Stakes 2020.

The Mornington-based trainer has Supreme Idea ($7.50) coming off a two and a half length Geelong win from Boxing Day and Award Winner ($8) also looking to remain undefeated after her Bendigo success on debut in mid-December.