Hall of Fame trainer David Hayes believes the team’s smart filly Personal has “invited herself” into the 2020 Blue Diamond Stakes next month following a second-up win at Flemington on Saturday. 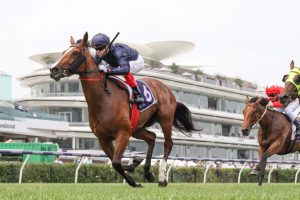 Personal is on way to the 2020 Blue Diamond Stakes after a late win in the first at Flemington on Saturday. Photo: Ultimate Racing Photos.

The daughter of Fastnet Rock improve don her second at Geelong on debut at the start of the month to salute for the punter’s in the $125,000 Flemington Event Staff Handicap (1100m).

Ridden to a half-length victory by Craig Williams, the filly was especially impressive over the final 200m having come from behind to pick up her rivals and defeat Parlophone by a half-length.

Personal reminded co-trainer Hayes of a previous star filly of his, Miss Finland, who also won a January sprint at Flemington at her second career start back in 2006.

“I do really think this filly is very, very good,” Hayes told the media post-win.

“Miss Finland won down the straight [in the Listed Talindert Stakes] at her second run but she also won her first race in a small field at Ballarat.

“This filly, I think is very similar at the same stage. If she ends up that good? Not many do.

Miss Finland would go on to win that year’s Group 1 Golden Slipper Stakes (1200m) in Sydney after a Blue Diamond Stakes third, as well as four other Group 1 features including the 2006 Thousand Guineas (1600m) and VRC Oaks (2500m).

At this stage, Hayes has Personal pegged as more of a future miler – stayer than a sprinter but is eyeing a run in the Group 1 $1.5 million Blue Diamond Stakes (1200m) for her at Caulfield on February 22.

“I think she just invited herself, if you ask me,” Hayes said.

“A high-pressure race, with a big finish like that. It’s tempting.

“We’ll see how the race pans out as the day goes on. I reckon she ran a pretty good last furlong.

“We’ll just see how she pulls up whether she has a run before it or goes straight in because I do think she’s probably more of a Sires’ Produce Stakes filly than a sprinter. But Miss Finland was a bit that way as well.”

The Group 1 $1 million Inglis Sires’ Produce (1400m) runs at Royal Randwick on April 4 as part of ‘The Championships’ Day 1.

Hayes has enjoyed four Blue Diamond Stakes wins since 2006 including most recently his 2017 success with the filly Catchy – ridden to victory by Williams – in partnership with his son Ben and nephew Tom Dabernig.