Trainer Danny O’Brien will use a handicap clash at Flemington this Saturday as the first-up run for his Australian Guineas 2020 bound colt Banquo. 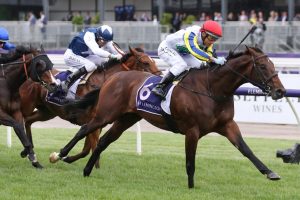 Banquo will return to racing at Flemington on Saturday ahead of a 2020 Australian Guineas bid. Photo: Ultimate Racing Photos.

The well-bred son of Written Tycoon has had six starts to date for two wins and will chase a third career start in the $135,000 Donate to Salvation Army Disaster Appeal (1100m) on Kensington Stakes Day this weekend.

Banquo improved on a breakthrough win at Sale over 1400m in late October handling a quick back-up to post his maiden Black-Type success at HQ over the Melbourne Cup Carnival in November’s Listed World Horse Racing Springtime Stakes (1400m).

He was then stepped-up in class for a run in the Group 2 Sandown Guineas (1600m) where he lost few admirers running under a length back fourth over the mile.

A mile is where O’Brien would like to get the three-year-old up over again this coming Melbourne Autumn Racing Carnival with Banquo being aimed at the Group 1 $1 million Australian Guineas (1600m) on February 29.

“He’s had a great summer down at Thirteenth Beach. He’s big and strong and he trialled up nicely in a jump-out at Werribee recently.

“(Jockey) Damien Oliver and myself thought it would be nice to kick him off in a short course race where he can find the line off the back of the others.

“We’d love to get him to the Australian Guineas.

“He’s got a platform there from the spring which he will need to improve from to be competitive in the Guineas, but we think he can.

“We’re going to give him his chance to get there.”

O’Brien took over the training of Banquo, a brother to last year’s Group 1 Oakleigh Plate champion Booker, from Kiwi horseman Stephen Marsh late last year and has been in charge for all but the horse’s debut.

O’Brien is also a two-time Australian Guineas winning trainer having prepared Shamrocker (2011) and Shamus Award (2014) for their respective victories in the Flemington feature.

Banquo meanwhile can be found further down the futures Australian Guineas betting markets at $34, a price sure to shorten with a win on Saturday.

The 2020 Australian Guineas nominations close on Monday with current all-in betting on the classic available here courtesy of Ladbrokes.com.au.