Three of the six sprinters accepted in the diminutive Kensington Stakes 2020 field at Flemington on Saturday are battling for top spot in betting on the short-distance feature with markets narrowly led by All Too Royal. 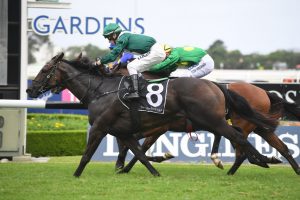 All Too Royal is narrow favourite to win the 2020 Kensington Stakes down the Flemington straight this Saturday. Photo: Steve Hart.

Current Kensington Stakes odds at Ladbrokes.com.au are led by the Ciaron Maher & David Eustace-trained All Too Hard five-year-old All Too Royal ($3) who carries the 58.5kg topweight from barrier five.

Group 1 winning three-year-old Microphone originally topped the weights with 60kg but was a non-acceptor into the final field.

Second-up the All Too Royal presents fit after his three-quarter length Black-Type victory at Caulfield on Boxing Day in the Listed Christmas Stakes (1200m).

Undefeated over the shorter 1000m distance (2:2-0-0), the consistent gelding rises four and a half kilos from his last start victory but remains the punters’ pick with Mark Zahra coming aboard for the ride.

Co-trainer Mark Zahra admits the three-week turnaround into Kensington Stakes isn’t exactly ideal but that the horse was in excellent order.

“There doesn’t appear to be many suitable options around which makes it tricky,” Zahra told AAP earlier in the week.

“It looks like it’s going to be a small field on Saturday.

“He’s obviously going very well. That was a career-best performance for him first-up and we couldn’t be happier with him.”

It is a tight Kensington Stakes betting market this Melbourne Summer Racing Carnival with two other horses also under $4 for the win with the Gary Portelli-trained Time To Reign ($3.20) and Bold Star ($3.70) drawn in barriers one and two respectively.

The rails-drawn Time To Reign has Damien Oliver aboard for his first-up run on the weekend.

The well-bred Time For War colt has had six career starts to date for three wins including taking out the Group 2 Silver Slipper Stakes (1100m) at Rosehill last February by over two lengths.

He went on last autumn to contest the Group 2 Todman Stakes (1200m) and Group 1 Golden Slipper Stakes (1200m) but could only manage to finish sixth and fifth respectively before going to the paddock.

Saturday marks his first run since the Golden Slipper 10 months ago, Time To Reign brought on fitness wise with two recent trials including a Warwick Farm victory over 804m by nine and a half lengths at the start of the month.

The second was also at Flemington on New Year’s Day when the Adelaide raider finished runner-up to Halvorsen in the Group 3 Standish Handicap (1200m).

Causeway Girl ($19) rounds out the field and market, the Clinton McDonald-trained Shamus Award mare coming off a close third at Caulfield from January 4 behind Tony Nicconi in a Benchmark 84 over 1100m.