The upset win by Ciaron Maher & David Eustace’s class filly Away Game in the $2 million Magic Millions 2YO Classic on the Gold Coast over the weekend has seen the up-and-comer firm notably in pre-field Golden Slipper 2020 betting markets. 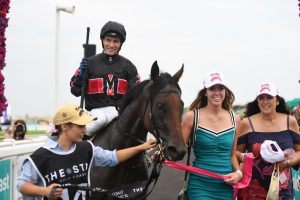 The world’s richest race for two-year-olds, the $3.5 million Longines Golden Slipper Stakes (1200m) runs at Rosehill Gardens on March 21 during the Sydney Autumn Racing Carnival and is now a confirmed target for untapped Snitzel filly Away Game.

The brilliant bay took her career earnings up in excess of $1.24 million with a runaway win at $41 odds in the Restricted Listed Magic Millions 2YO Classic (1200m) last Saturday.

Backing-up off a lead-up Doomben win in the Listed Calaway Gal Stakes (1100m) at just her second career start, the Black-Type winner has already won by more than double her purchase price of $425,000.

Her empathic one and three-quarter length win over fellow filly, the Peter & Paul Snowden-trained Stellar Pauline, saw Away Game become the fourth straight female winner of the Classic and the eighth in the past 11 years to beat home the colts and geldings.

She was also the second Magic Millions Classic winning filly ridden home by cool-headed hoop Luke Currie who also took out the feature in 2018 aboard the talented Sunlight who has won a subsequent three Group 1 sprints.

Away Game was sent straight to the paddock for a well-deserved spell after her big payday on the Gold Coast with her Victorian-based trainers eyeing an autumn return targeting the coveted Golden Slipper.

“She will be one run into the Slipper,” co-trainer David Eustace told AAP.

“Whether it’s the Silver Slipper leading in we can work that out. She will have a few easy days and then look towards the Slipper.”

The traditional lead-up into the Golden Slipper, this year’s Group 2 $250,000 Silver Slipper Stakes (1100m) runs at Rosehill on February 22.

Sunlight in 2018 went on to run third in the Golden Slipper after her Magic Millions Classic success, while outstanding colt Capitalist (2016) was the last to do the double.

Sunlight also backed-up out of the Magic Millions to win the Group 2 Silver Slipper and Group 3 Magic Night Stakes on way to her Golden Slipper placing.

All-in Golden Slipper odds at Ladbrokes.com.au have firmed on Away Game to be the next Magic Millions Classic – Slipper double winner into $15.

Her position in the Golden Slipper Stakes ballot and order of entry however will exclude her $1,165,000 winners’ cheque for the Magic Millions Classic.

She occupies the second line of betting alongside stablemate Muntaseera and they trail only the $12 favourite Dame Giselle.

Also prepared by Maher & Eustace, I Am Invincible filly Muntaseera has had two starts to date last November.

On debut she paced second to Aryaaf at Flemington on Melbourne Cup Day in the Group 3 Ottawa Stakes (1000m) before a breakthrough win in a two-years-old handicap over 1100m at Rosehill three weeks later by a runaway three and a half lengths.

Current Golden Slipper favourite Dame Giselle is also a daughter of I Am Invincible, the Snowden-trained filly second on debut at Randwick in late October before her barnstorming win in Rosehill’s $1 million Golden Gift (1100m) by nearly four lengths.