The bookies are taking no chances with last weekend’s runaway Magic Millions Guineas winner Alligator Blood who has shot to the top of Australian Guineas 2020 betting despite trainer David Vandyke yet to confirm a Melbourne Autumn Racing Carnival bid for his brilliant three-year-old. 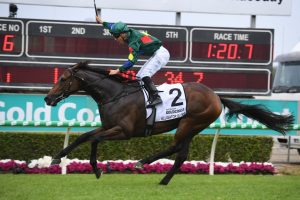 Alligator Blood is favourite for the 2020 Australian Guineas in Melbourne after a powerful Magic Millions Guineas win. Photo: Steve Hart.

Nothing went right on race morning for All Too Hard gelding Alligator Blood last Saturday with the odds-on favourite for the $2 million Magic Millions 3YO Guineas (1400m) caught up in a four hour traffic delay on his way from Brisbane to the Gold Coast.

Showing great maturity and more than just a flash of brilliance however, the horse took it all in his stride once the race finally got underway and charged home for a two-length victory over Eleven Eleven.

It was Alligator Blood’s eighth win from nine career starts with his sole loss to date being the extremely close second to Super Seth in the spring’s Group 1 $2 million Ladbrokes Caulfield Guineas (1600m).

He has won all three races since in Queensland making him the new star of the sunshine state and earning himself a well-deserved stint in the paddock after his Magic Millions Day triumph.

Bookmakers around the country have subsequently wound in the price for Alligator Blood in a number of the upcoming Melbourne Autumn Racing Carnival majors, but Vandyke is not certain the horse will head south that early in the season.

“I’ll make a decision next week about our next move. Whether he’s going to head towards Melbourne or whether he goes for an extended break,” Vandyke told Sky Sports Radio on Sunday.

“He is a gelding and he could be around for years to come.

“So, whether we go to Melbourne or not, I’ve had people say he could be an Everest horse or a Golden Eagle horse.

“There are a lot of races for him.”

Pre-field betting on the Group 1 $1 million Australian Guineas (1600m) at Flemington on February 29 currently has Alligator Blood at a short $4.20 through Ladbrokes.com.au.

His closest rival for that mile classic at $7 is Kiwi star Catalyst, a five-time winner from six starts including the Group 1 2000 Guineas (1600m) at Riccarton by over two lengths last November.

Alligator Blood is also tipped to take out the Special Condition $5 million All-Star Mile (1600m) run this season at Caulfield on March 14.

Futures markets on the All-Star Mile 2020 have Alligator Blood on the top line of betting at $8 as the equal favourite with another gun New Zealander, Melody Belle.

A five-year-old daughter of Commands, the Jamie Richards-trained Melody Belle is a 10-time Group 1 winner including her sole elite level victory down under in last November’s Empire Rose Stakes (1600m) at Flemington on Derby Day.

Should he contest both the Australian Guineas and the All-Star Mile, Alligator Blood will be looking to emulate the double achieved last year by Tassie triumph Mystic Journey when both events were held at Flemington.