Star local galloper The Candy Man is tipped as the horse to beat in Saturday’s 2020 Magic Millions Trophy at the Gold Coast firmly installed top of the odds for the $1 million Restricted feature. 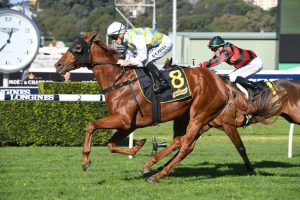 Primitivo (pictured) is one of the main rivals taking on The Candy Man in Saturday’s 2020 Magic Millions Trophy on the Gold Coast. Photo: Steve Hart.

The third of nine Magic Millions races on the Gold Coast card this weekend, the $1 million Ferrari Magic Millions Trophy (2400m) features a 14 horse field for the 2020 edition.

Leading the Magic Millions Trophy betting markets at Ladbrokes.com.au at $2.20 and firming is the Barry Baldwin-trained track specialist, popular grey The Candy Man.

A Group 3 winner in Brisbane last winter and Group 1 performed in Sydney during the spring, comeback king The Candy Man has been back to his best form over the Queensland Summer Racing Carnival.

The six-year-old son of Casino Prince comes into the Magic Millions Trophy field having won three of his past four lead-up runs, the latest seeing him carry 60.5kg to a nearly three length Eagle Farm win on December 28 in the Shoot Out Quality (2218m).

The Candy Man again carries plenty of weight returning to the Gold Coast track for the first time since his back-to-back 1800m wins in the mud back in May allocated Saturday’s 61kg topweight.

Despite the heavy kilos the bookies are taking no chances with the class galloper who earned his spot in the field thanks to the wild card entry on offer in the Shoot Out Quality.

Baldwin, who is unfazed by the weight, meanwhile is hoping for a clear run on the day for his stable star.

“I thought one or two of the others might have got a bit more than the minimum,” Baldwin, 76, told the media this week.

“But my main worry is there are a couple in the field who will get a stitch at 2400 metres and get in our way.

“The Candy Man has won both his starts at the Gold Coast and he likes the track. But there can be traffic jams there and I don’t want to get caught in one.”

Of those, A Man To Match is the only last start winner with the gelding coming off a narrow win over the track and distance in The Wave (1800m) on January 4.

In that Magic Millions qualifier, A Man To Match was allocated 58.5kg but got the apprentice claim of Baylee Nothdurft who retains the ride on Saturday aboard the galloper who looks well-weighted on 54kg.

It was a gutsy win by the bay who has been racing in excellent form across the Queensland Summer Racing Carnival and who looks a genuine danger for The Candy Man in the $1M MM Trophy.

Trainer Chris Waller has won the past two editions of the Magic Millions Trophy with dual champion Tumultuous who returns as a $34 shot to make it three consecutive wins.

Waller’s other hope of a Trophy hat-trick is the widely drawn Black On Gold ($10) drawn gate 13 and coming off back-to-back seconds in Sydney Black-Types.

The Sebring six-year-old was runner-up to stablemate Alward in the Listed ATC Cup (2000m) at Rosehill on November 30 before his second to Luvaluva at Randwick on Boxing Day in the Group 3 Summer Cup (2000m).