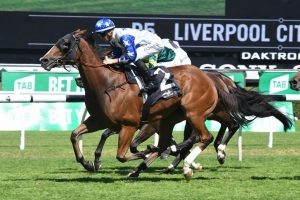 Crack Me Up carries top weight in the 2020 Magic Millions Cup field at the Gold Coast on Saturday. Photo: Steve Hart.

Heading the latest Magic Millions Cup odds at Ladbrokes.com.au, Lope De Vega four-year-old Vega One is at a firming $3.90 having been backed in from opening odds of $7.

Michael Rodd is set to retain the ride on the gelding from barrier 13 having partnered the Queenslander for his eye-catching 1.75 length win in the $250,000 The Gateway (1400m) at Eagle Farm on December 14.

That win guaranteed Vega One a shot at the Group 1 Stradbroke Handicap over the winter and, following a subsequent Doomben trial win on December 31, sees the horse start favourite for the Magic Millions Cup this weekend.

Despite the size of the field just three other runners currently sit under $10 in the $1M Magic Millions Cup betting markets including the $4.60 second elect Deep Image.

The Robert Heathcote-trained Testa Rossa six-year-old has won three of his past four starts including back-to-back victories in Brisbane last month.

Deep Image is also drawn wide for the Magic Millions Cup currently into barrier 16 but can overcome the gate with a forward run early and present as a danger over his pet distance.

Five-time Brisbane Premiership winning trainer Heathcote is out to shake his hoodoo at the Gold Coast track and believes Deem Image could be the horse to do so despite the wide alley.

“I’m not sure why but it’s not my favoured track,” Heathcote said.

“I won the inaugural Magic Millions QTIS race with Buffering a few years ago but outside him I haven’t had a lot of luck there.

“Maybe it’s because the horses I’ve had weren’t good enough.

“A wide alley for him is not a bad thing and he comes in three without the emergencies.

“He can be slow away so drawing off the track is not a big disadvantage.

“He’s bang in-form and I’ll be going to the races on Saturday confident he’ll run a very big race.”

Mossman six-year-old joined the stables of Toby & Trent Edmonds from Liam Birchley late last year and on debut for his new stable finished fifth, only a half-length beaten in a blanket finish at big odds in the Group 3 George Moore Stakes (1200m) on November 30.

Crack Me Up had barrier 14 of 15 that day and 60kg on his back so was impressive under the circumstances and has won a subsequent Gold Coast trial ahead of his return on the weekend.

Melbourne raider Usain Bowler is second-up and looking to atone for his 10th at Randwick on December 21 over 1200m, the So You Think five-year-old getting his chance to do so coming back six kilos.

Defending champion Redouble will start from the outside alley with Craig Williams in the saddle again, the horse a $12 chance despite a four kilo increase on his 54kg winning weight from 12 months ago.