Local Brisbane horseman Steven O’Dea was cheering at Eagle Farm after the first with his class young filly Gotta Kiss sealing her spot in the Magic Millions 2YO Classic field with a home track win. 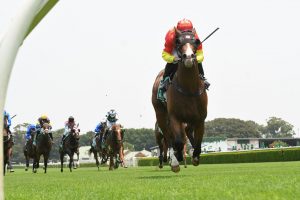 The flashy chestnut lined-up from the inside alley with apprentice hoop, former Victorian rider Stephanie Thornton, continuing associations in Saturday’s $125,000 Magic Millions Basil Nolan JR QTIS 2YO Plate (1000m) and made the most of the barrier.

It was the daughter of Not A Single Doubt’s third run at Eagle Farm over the 1000m where she won by 2.5 lengths on debut in early October and had also run a narrow second as the beaten favourite behind Rothfire in a 2YOs Handicap a fortnight later.

She jumped the favourite third-up after a seven length Deagon trial win on December 10 and didn’t disappoint despite things not going to plan in the early stages as the pacemakers fought for positions.

Thornton didn’t panic however, holding her spot on the fence allowing Gotta Kiss to show off her natural ability with a neck to spare on the line over the brave Matthew Dunn-trained runner-up Lady Banff in the set weights clash.

In third a further 1.5 lengths back to round out the trifecta was the Ciaron Maher & David Eustace-trained Anders.

The victory saw Gotta Kiss secure a start in next month’s Restricted Listed $2 million Magic Millions 2YO Classic (1200m) at the Gold Coast on January 11 with the filly’s prize money going up to $129,550.

Thornton was full of post-race praise for Gotta Kiss in Brisbane on Saturday and was confident the step-up in distance for the Magic Millions Classic would be even more suitable.

“I’m really pleased with her, it takes the pressure off we’re in the Millions now and she gave me the feel that the 1200 is going to be ideal,” she said.

“We got the gap fairly early in the straight and got up to the leader fairly quickly, but she was still running through the line.”

The filly won the Basil Nolan Jr 2YO Plate in a slick 56.77 seconds, beating the previous overall class record of 57.22 to further boost her trainer’s opinion of her.

“I think she’s going to be even better in a frantically run race two or three pairs back where she can do her best work late,” O’Dea said.

“She got a little bit hot in the yard today it’s still all a little bit new for her but the run will bring her on and I’m looking forward to getting her to the 1200.

“She had the three weeks off and did really well in between put a bit of weight on, she’s shown good ability from the get-go and never let us down – it’s exciting to be heading to the Millions.”

Gotta Kiss has also shorted in the all-in Magic Millions 2YO Classic odds at Ladbrokes.com.au after a Saturday success.

Fillies have dominated the recent Magic Millions 2YO Classic results with Houtzen (2017) and Sunlight (2018) both beating home the boys before the 2019 success of the Godolphin-raced Exhilarates at the start of the year.