The Gai Waterhouse & Adrian Bott-trained Farnan has shot to the top of 2020 Magic Millions 2YO Classic betting for the Gold Coast feature next month after beating the favourite in the traditional Wyong lead-up this week. 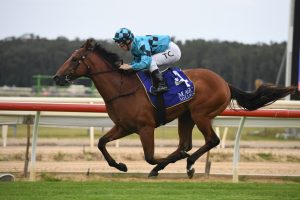 Wyong winner Farnan is now favourite to win the $2 million Magic Millions 2YO Classic next month at the Gold Coast. Photo: Steve Hart.

It was Tim Clark aboard Not A Single Doubt colt Farnan who stole the show however, the up-and-coming bay making it two-from-two to kick off his career.

On debut the galloper stormed home in a 2YO Handicap at Canterbury on November 17 carrying 58kg to a nearly five length win as the odds-on favourite.

He started short in betting as the $2.90 second favourite at Wyong and relished the drop to 56.5kg as well as the step-up to 1100m to beat Every Rose by just over a length.

Clark sat just outside the lead on Farnan before charging to the front at the top of the straight and maintaining that lead to the line.

“He began well, got outside the leader no worries, controlled the speed from there and he gave me a nice kick.

“I felt the filly coming at me, but he responded for me and was nice and strong through the line.”

That performance was immediately recognised by bookmakers around the country, Farnan firming in from around $50 to the $5 favourite in pre-field Magic Millions 2YO Classic odds for the $2 million Gold Coast event over 1200m on January 11.

Co-trainer Bott was impressed with the young horse’s attitude second-up, tipping bigger things to come from Farnan over the coming season.

“His attitude’s what won him the race,” he said.

“Like all those good young horses and good colts in particular, he’s got a good attitude.

“He’s a lovely physical type, a nice strong individual so that will take him a long way.

“We’ve still got a long while to go to get up to the Gold Coast so we’ll see if he needs another run yet or not but we’ll plan that after today.

“Today was the important one to get out of the way.”