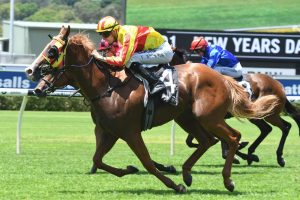 Quackerjack is tipped as the horse to beat in the 2019 Villiers Stakes this weekend in Sydney. Photo: Steve Hart.

All the money at Ladbrokes.com.au is coming for the Not A Single Doubt gelding to take out the $250,000 Group 2 Villiers Stakes (1600m) fourth-up this weekend after a consistent lead-up spring prep.

Quackerjack was one of the 15 original acceptors into the Villiers Stakes field, which is now down to 14 following the early withdrawal of Strome (8).

The scratching sees the top fancy come in from barrier 11 to 10 with Quackerjack dominating the markets at current Villiers Stakes odds of $3.

Two back the in-form chestnut enjoyed a win in the Goulburn Cup (1400m) before his close last start second behind the well-performed Mister Sea Wolf in the $1 million The Gong (1600m) at Kembla Grange.

He’s been freshened-up since that eye-catching performance on November 23 and tipped to return to winning form adding to his strong record over the Randwick mile (3:2-0-0).

Rachel King continues her association on Quackerjack in the Villiers Stakes, the galloper heavily supported despite rising from 52kg last start to 56kg on Saturday.

There are six other single-figure chances in Villiers Stakes betting this weekend but the closest to the market mover Quackerjack is Ranier at $8.

Drawn just worse than midfield, the Godolphin-raced son of Lonhro was last seen winning the Group 3 Festival Stakes (1500m) at Rosehill on November 30.

Ranier is another in-form four-year-old who has been racing well at the tail-end of 2019, but the James Cummings-trained galloper also goes up in weight from 53kg to 55.5kg.

He remains a winning hope with Kerrin McEvoy to ride, but also rises in distance so will need to be at his best to give proven miler Quackerjack a run for his money late.

Equal second favourite at $8 is then the Kris Lees-trained mare El Dorado Dreaming who has work to do with 57kg.

Brenton Avdulla is aboard the Group 1 winning Ilovethiscity four-year-old whose autumn including back-to-back Group 1 placings in March.

She is another The Gong graduate having run 1.3 lengths back fifth second-up and she will be finishing off well late, but the weight works against her here.

Drawn closer to the rails in barrier three is the $9 third favourite Bobbing for Scone trainer Bernie Kelly.

The Beneteau six-year-old won the lucrative Provincial Championship Final here in April and also took home some good prize money first-up at the track when third in the $1 million The Kosciuszko (1200m) in October.

His last start produced a sixth when nearly four lengths off Ranier in the Festival Stakes and he stays on the same 53kg weight here giving him a chance at finishing in the money on Saturday.

The heavily-weighted Gold Fields (58.5kg) chasing a third win on the trot, Glen Boss’s mount Live And Free ($9.50) coming off a Festival Stakes second and the widely-drawn Noble Boy (barrier 15) then follow at $9.50 each for the win.

See below for the full Villiers Stakes 2019 field and barriers, race odds on the Group 2 feature available here courtesy of Ladbrokes.com.au.