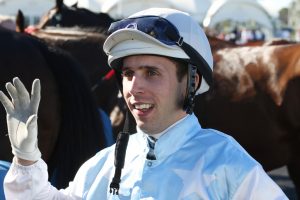 Following two early scratchings, there are 14 remaining hopefuls for the Group 1 $1 million Railway Stakes (1600m) and markets at Ladbrokes.com.au are a wide-open affair this Perth Summer Racing Carnival.

Four hopefuls are currently battling for top spot in the Railway Stakes odds with the position currently held by Tellem We’re Comin ($5) to be ridden from gate nine by Brenton Avdulla.

The in-form Blackfriars five-year-old chases a hat-trick of wins after back-to-back Listed victories in easier company.

The latest was in the Northam Cup (1600m) on October 27 carrying 57kg and this weekend Tellem We’re Comin will relish the drop back to the 53kg minimum in the Railway Stakes weights.

It might be a notable rise in grade for the gelding, but the galloper boasts a perfect four-from-four record over the mile and has been kept fresh since his impressive three length win a month ago.

Great Shot finished equal third in the Northam Cup before winning the Railway two starts later in 2017, form Tellem We’re Comin is out to frank this year.

Occupying the second line of Railway Stakes betting at $6 is then the Darren Mcauliffe-trained The Velvet King who also gets in on just 53kg and comes off a string of nice lead-up runs.

The consistent Universal Ruler four-year-old has had seven runs at Ascot for three wins and a further three placings including the Group 3 Northerly Stakes (1400m) victory in October.

He comes via the traditional Railway Stakes lead-up having finished a close third when only a half-length off the winner in the Group 2 Lee Steere Stakes (1400m) on November 9 carrying 59kg in that weight-for-age event.

The Velvet King looks rock hard fit for the Railway and looks the danger with the weight going up over a mile.

Samizdat ($6.50) and Regal Power ($7.50) drawn at opposite ends of the field in gates three and 13 respectively are the other single-figure runners in the current markets.

Chris Gangemi trains Not A Single Doubt four-year-old Samizdat who has been impressive so far winning five of his eight career starts.

The untapped gelding is yet to race over the 1600m, but caught the eye on November 2 taking out the Group 3 Asian Beau Stakes (1400m).

Regal Power is a graduate out of that same race, the Williams-trained son of Pierro second-up after the eye-catching second in his first start since taking out the Group 2 WATC Derby (2400m) in April.

The best of the value double-figure bets in the Railway Stakes 2019 include Makybe Diva Stakes champion Gatting ($12) with the 58kg topweight, the Godolphin-trained interstate raider Best Of Days ($10) and Damien Oliver’s mount Achernar Star ($13).

Achernar Star has a wide barrier (14) to overcome, but ace hoop Oliver will be doing his best to take out his maiden Railway Stakes win at his 18th attempt.

“It’s the one big race in WA that has eluded me. I have had a few goes at it — I think someone told me 17 recently. It’s such a hard race to win and coming from WA, it is probably the greatest race in Perth,” Oliver told the Herald Sun speaking of the Railway Stakes.

“He is a tough, seasoned horse. He has got an awkward draw which is going to make his task tougher, but he is the sort of horse who can run well in a race like this,” Oliver said.

“It was a good effort (at Bunbury) and he overcame a wide-ish gate that day. I think Tellem We’re Coming was a bit unlucky that day, so he is a horse who is going to be hard to beat. It seems like a very open race this year and we are one of a number of good chances.”

Click here for the latest Railway Stakes 2019 odds courtesy of Ladbrokes.com.au – the race due to jump at 4:50pm (AWST).