The punters are starting to rally for last start winner Superstorm in the WA Guineas 2019 betting markets at Ascot this afternoon. 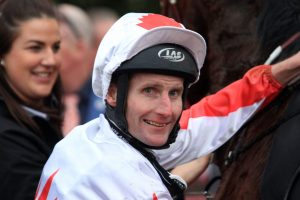 The key support act on Perth’s Railway Stakes Day race card, this year’s Group 2 $500,000 W.A. Guineas (1600m) field is down to 11 runners after the early withdrawal of the Lou Luciani-trained Three Eze (9).

Heading the latest WA Guineas odds online at Ladbrokes.com.au are two in-form three-year-olds looking to stretch out over the mile with current favourite Dig Deep ($3.40) and early firmer Superstorm ($4.60 into $3.90).

Sebring chestnut Superstorm represents Grant & Alana Williams from gate eight and comes off a maiden win at the track over 1400m on Melbourne Cup Day (November 5).

The Wizard of the West William Pike was aboard for that Class 1 victory by 1.45 lengths and the ace hoop retains the ride looking to continue his outstanding form this carnival.

Superstorm was odds-on for his lead-up win carrying 57kg and despite the notable rise in class, looks a value punt in the Group 2 with 56.5kg at set weights.

The danger is the aforementioned Dig Deep to be ridden by Damien Oliver from gate nine.

There’s also been plenty of money on the Daniel & Ben Pearce-trained Deep Field gelding who chases his first win since the Group 2 Karrakatta Plate (1200m) as a juvenile back in April.

Dig Deep has had three runs this prep, the latest seeing him carry 58kg to a close third on November 9 in the Listed Fairetha Stakes (1400m).

Finishing off strongly that day, he faces a similar line-up of rivals and the step-up to a mile should suit.

There are two other single-figure fancies in the latest WA Guineas betting markets for this afternoon’s showdown with the widely-drawn Jericho Missile ($6) and Neville Parnham’s smart filly Kay Cee ($7).

His last run produced a second in the Fairetha Stakes when narrowly beaten and is another who looks likely to run out a strong 1600m.

Kay Cee is the best fancied of the fillies taking on the boys in this year’s WA Guineas field looking to make it three on the trot for the girls following the success of Perfect Jewel (2017) and Arcadia Queen (2018).

The Neville Parnham-trained filly is bred for success being a daughter of 2010 WA Guineas winner Playing God, a dual Kingston Town Classic winner and multiple interstate Group 1 placegetter in Melbourne.

Kay Cee is out to emulate her sire Playing God who won the 2010 WA Guineas Bet now with Ladbrokes.com.au

Click here for the latest WA Guineas 2019 odds courtesy of Ladbrokes.com.au – the race set to jump at 4:10pm (AWST).