Two class mares are battling for top spot in the 2019 The Gong betting at Kembla Grange this weekend with Hot Danish graduates El Dorado Dreaming and Luvaluva tipped as the ones to beat in the inaugural edition of the $1 million feature. 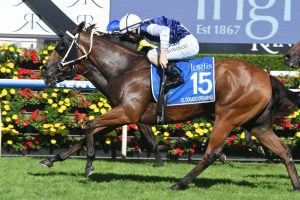 The last of the new seven-figure The Everest Festival features held across the Sydney Spring Racing Carnival, the $1 million The Gong (1600m) features a capacity field for the first running on Saturday.

Newcastle’s Kris Lees launches a three-pronged attack on the event and his Ilovethiscity mare El Dorado Dreaming, winner of the Group 1 ATC Sires’ Produce Stakes as a two-year-old in 2018, is the current $5 co-favourite in The Gong betting at Ladbrokes.com.au.

The four-year-old was in top form during the autumn running two Group 1 placings in the Surround Stakes (3rd) and Coolmore Classic (2nd) and was in the money again second-up this prep in the $500,000 Group 2 Hot Danish Stakes (1400m).

She was only 1.7 lengths off the winner Reelem In Ruby at Rosehill on November 9 carrying 57kg and drops to 54kg with Kerrin McEvoy to ride from a nice barrier five draw in The Gong.

“[El Dorado Dreaming] is coming off a nice run at the Hot Danish two weeks ago,” Lees told the Illawarra Mercury this week.

“She looks a nice option for the mile. She’s only had one win but she’s raced at a high level; she’s a Group 1 winner.”

Sharing the top line of The Gong betting is Hot Danish Stakes fifth placegetter Luvaluva drawn one wider in barrier six with Tim Clark aboard the John Sargent-trained Mastercraftsman mare.

Luvaluva hasn’t won a race since April of 2018 so is out to break a notable drought, but she has winning form at this track / distance having saluted in last year’s Group 3 Kembla Grange Classic (1600m).

Three other runners are also under $10 to become the first The Gong winner including the Peter & Paul Snowden-trained Military Zone ($7).

The four-year-old Epaulette gelding is fourth-up on Saturday having been thereabouts all prep, his last start producing a seventh when four lengths off Kolding in the $7.5 million Golden Eagle (1500m) on November 2 at Rosehill.

He jumped at a roughies’ price that day from barrier 12 and looks better suited in eight coming back to 53kg here.

Star Of The Seas ($7.50) for trainer Chris Waller and jockey Glen Boss, and early market mover Noble Boy ($8) then round out the single-figure The Gong hopefuls on the weekend.

Ocean Park chestnut Star Of The Seas ran third to stablemate Kolding in the Group 1 Epsom Handicap (1600m) two back at Randwick before his ninth in a competitive edition of Flemington’s Group 1 Kennedy Cantala (1600m) during the Melbourne Cup Carnival.

He is against easier company in The Gong, but will need to dig deep going up to 55.5kg as the second topweight in the race behind the also Waller-trained Mister Sea Wolf (59kg).

Noble Boy meanwhile has been in strong form this spring, narrowly beaten in all three starts including finishing a quarter-length third to Reykjavik in Flemington’s Group 3 Chatham Stakes (1400m) on November 9.

See below for the full The Gong 2019 field and barriers, the latest odds available here courtesy of Ladbrokes.com.au.