It was an all-roughie trifecta in the 2019 Matriarch Stakes results on Mackinnon Stakes Day with quality four-year-old mare Oceanex defeating fellow roughie hopes Miss Siska and Aristocratic Miss in the Flemington feature. 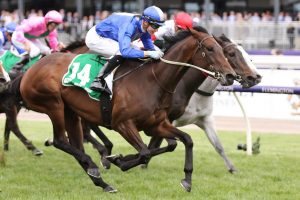 Oceanex increased her value at stud with an upset Group 2 win in the Matriarch Stakes on Mackinnon Stakes Day. Photo: Ultimate Racing Photos.

In a race where Girl Tuesday jumped as a short-priced $2.80 favourite, the punters that looked further down the markets enjoyed the riches in an upset Group 2 $300,000 Matriarch Stakes (2000m) result this Melbourne Cup Carnival.

With the rail out nine metres at HQ, connections of well-bred Ocean Park mare Oceanex had some reservations about her inside draw in the feature for fillies and mares.

Jockey Jye McNeil however didn’t read too much into it, allowing the eventual winner to jump cleanly from the gates.

He had her settled around sixth or seventh in the run as Team Hawkes’ last start Group 3 Tesio Stakes winner at The Valley Amangiri led the field around at an even speed.

Oceanex was tucked away nicely just off the pace before the field bunched approaching the turn.

The favourite Girl Tuesday from the back tried to go back on the inside and work her way into the race but didn’t get the run.

Over the final furlong it was a line of four really battling it out, Oceanex ($17) charging down the centre to edge out the Grahame Begg-trained So You Think six-year-old Miss Siska ($26) on the quick back-up off her eighth to Melody Belle in the Group 1 Empire Rose Stakes (1600m) on Derby Day.

“I didn’t think the barrier was going to suit…but we got to edge away from the fence and she had plenty of time to build into the race and she really deserves this win today,” McNeil said of Oceanex post-victory.

“She ran through the line really strongly and she’s seems to have pulled up really well too so onwards and upwards.”

The Matriarch Stakes results capped off a wonderful carnival for Mick Price and Michael Kent Jnr who celebrated their third victory from just nine runners over the four days at Flemington.

“Barrier one and the big track at Flemington, she appreciates the big open space,” co-trainer Price said.

“She’s had a really good prep and to nail it in a Group 2 just makes her such a valuable broodmare now.