Irish mare True Self handed her trainer William Mullins with a nice consolation prize and earned talks of a 2020 Melbourne Cup bid next spring with her powerful win on Mackinnon Stakes Day in the Group 3 $300,000 Queen Elizabeth Stakes (2600m). 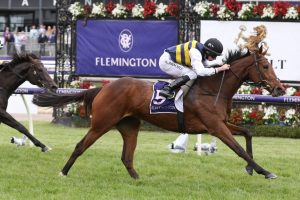 Leased by OTI Racing, the Oscar mare was brought down under for a shot at the Group 1 $8 million Lexus Melbourne Cup (3200m) but was balloted out of the two-mile classic.

Prince Of Arran then franked that form with another top three finish in the ‘race that stops a nation’ behind Vow And Declare on Tuesday.

Unfortunately for Mullins and connections, True Self failed to make the 24 horses in the Melbourne Cup field.

It wasn’t the end of her raid however as she turned up and took out the bonus by winning the VRC Queen Elizabeth Stakes at Flemington thanks to a brilliant ride by world-class hoop Ryan Moore.

Moore had the short-priced favourite True Self settled just worse than midfield on the fence as Sir Charles Road led the pack around in a slowly run race.

Approaching the turn the pace quickened with True Self still four off the lead in a tightly packed field.

Caught up for a run on the straight, Moore kept his cool.

The gap just opened-up for the star jockey to squeeze through and from there True Self’s class shone through as she charged home with excellent late acceleration.

“She only needed a tiny bit of space and she picked up very well.

“She was very comfortable as we were quickening and she was just too good for them.”

On the line she had around two lengths to spare over the Peter & Paul Snowden-trained Carif, the in-form So You Think four-year-old having to settled for his third second place finish on the trot after getting the lovely box-seat run in third.

The John Thompson-trained veteran Medicean nine-year-old Maurus, ridden by Tuesday’s Melbourne Cup winning hoop Craig Williams, then rounded out the trifecta in third enjoying a drop back in weight.

True Self is now set to head to Hong Kong, while the long-term aim is to have her fit and firing for a shot at the Melbourne Cup 2020.

“We’re surprised how much speed she’s shown on the flat.

“There is a good chance she might be back in 12 months’ time and running on the Tuesday instead of the Saturday.”

The current all-in Melbourne Cup odds on next year’s feature through Ladbrokes.com.au have True Self listed at $26.