Jamie Richards’ outstanding Kiwi-trained mare Melody Belle is the one to beat on the quick back-up in the 2019 Mackinnon Stakes as she chases her 11th career Group 1. 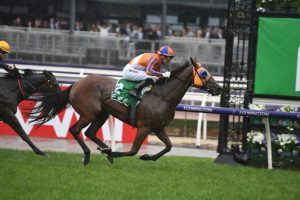 Only last Saturday on Derby Day at Flemington the flying Commands five-year-old broke her elite level maiden in Australia with a powerhouse win in the Group 1 Empire Rose Stakes (1600m).

That was her 10th Group 1 success and fourth on the trot following a brilliant lead-up back home in New Zealand.

Melody Belle overcame gate 13 of 16 in the Empire Rose Stakes and is drawn wide again as she tackles the boys in the Group 1 $2 million Seppelt Mackinnon Stakes (2000m) on the weekend.

This year’s there is a Mackinnon Stakes field of 16 plus two emergencies with Melody Belle drawing 16 – potentially into 14 – with Opie Bosson retaining the ride.

The step-up in distance looks ideal for the mare who is two-from-two over the 2000m and crying out for the metres after her 1.5 length win over the mile in the Empire Rose.

There is plenty of early money in Mackinnon Stakes betting at Ladbrokes.com.au however for Melody Belle to be the next as she has firmed in from $4 to $3.30.

Melody Belle is out to be just the third Mackinnon Stakes favourite from 2005-19 to salute for the punters Bet now with Ladbrokes.com.au

Despite the size of the field only two other runners are currently under $10 in the Mackinnon Stakes odds with Magic Wand ($7.50) and Humidor ($9.50) considered the dangers.

The Aidan O’Brien-trained Irish raider Magic Wand is on an even shorter back-up having run 10th behind homegrown hero Vow And Declare in Tuesday’s Group 1 $8 million Melbourne Cup (3200m).

The Galileo mare was brave in defeat having previously run fourth in the Group 1 Cox Plate (2040m) in her down under debut, Magic Wand hampered from the outside barrier (24 of 24) in the ‘race that stops a nation’.

Ryan Moore continues his association on Magic Wand in the Mackinnon Stakes as connections chase a consolation prize with the mare coming back to a more suitable distance on the final day of the Melbourne Cup Carnival.

Humidor meanwhile is out to break a notable winning drought, the seven-year-old son of Teofilo not having been first past the post since the 2018 Group 1 Memise Stakes.

The Ciaron Maher & David Eustace-trained gelding, a dual Cox Plate runner-up to Winx, has been performing below par this campaign with a host of unplaced runs.

He looked improved in the Group 2 Moonee Valley Gold Cup (2500m) after missing out on a Cox Plate start in 2019 however when fourth to Hunting Horn.

To wear the No. 1 saddlecloth is the veteran in the field, Godolphin’s Authorized nine-year-old Hartnell ($10) coming off a seventh in the Caulfield Cup when only three lengths beaten when finishing off well.

Hartnell retires from racing after his Mackinnon Stakes run set for a show career and only needs to finish in the top-eight to see his career prize money surpass $7.3 million.

The Mackinnon is the grand campaigner’s 34th Group 1 start and an upset win would see him overtake Black Caviar ($7.95) in earnings.

Around the same price in Mackinnon Stakes betting in 2019 is the Chris Waller-trained Kings Will Dream ($10) to be ridden by James McDonald.

This looks easier and a return to Flemington puts Kings Will Dream back in winning potential.

See below for the full Mackinnon Stakes 2019 field and barriers, the latest odds on the race available here courtesy of Ladbrokes.com.au.