Three of Australia’s most promising young sprinters were on display at Flemington on Saturday as the Group 1 Coolmore Stud Stakes (1200m) boiled down to a race to the finish between Libertini, Bivouac and Exceedance.

In the end, it was the Wayne Hawkes-trained three-year-old who got up over the top of his rivals in the $1.5 million race by storming down the inside rail. The colt by Exceed and Excel grabbed a hold of race-favourite Bivouac at the 50m mark, savaging the line on the way to a narrow victory.

Exceedance returned to the races following a freshen up after running third in the Golden Rose Stakes (1400m) at Rosehill back in September. Ladbrokes bookmakers had him listed as a $3.70 shot behind $3.40 favourite Bivouac, while Libertini wasn’t far behind at $5.00. 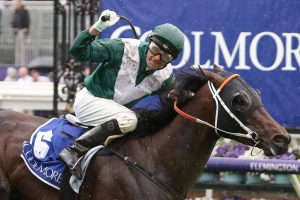 Saturday marked Exceedance’s first-ever Group 1 win and his third victory from six career starts. A special ride from jockey Dwayne Dunn helped achieve the result as the star hoop kept weaving back towards the inside after being squeezed early out of the gate.

“All credit goes to the horse, he looked after me once things went wrong early. He traveled up nicely and we knew what was under the bonnet and you’ve seen his acceleration” Dunn said after the race.

It was clear that Dunn planned to follow Bivouac in down the straight, but things became interesting at the 500m mark when the favourite began to kick away.

“I thought I was going to wind him straight in. Probably when I did get to him Bivouac had another little surge in the locker. To his credit he’s been a great horse as well, they’ve clashed a few times and luckily today we came out on top,” Dunn went on to say.

A step up to the mile could be on the cards when Exceedance returns to the races, but for now, it’s back to the paddock.

“It was grand final day for us and when Dwayne was stalking back towards the inside there I thought he’s got plenty of ride to go up the inside and what was going through my head was the San Domenico and Bivouac, and when I realized it was Bivouac I wasn’t that happy because I know he isn’t that hard to get past, he’s been a pain for us” Wayne Hawkes said of Saturday’s run.

Bivouac fought on well for a gutsy second after failing to place in the Manikato Stakes at The Valley last week. Libertini also finished in the placings for the fourth time this prep.