The Adelaide form continued to stack-up on Victoria Derby Day with the Leon Macdonald & Andrew Glyas-trained Dalasan taking out a $1 million bonus with his Carbine Club Stakes 2019 victory at Flemington. 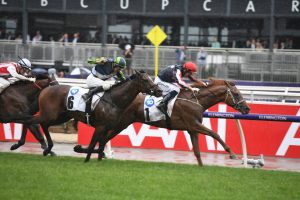 Dalasan was back in winning form with the blinkers off at Flemington in the 2019 Carbine Club Stakes on Derby Day. Photo: Steve Hart.

The second South Australian-trained winner at Flemington from the opening three races following the success of Kemalpasa in the first (Group 2 Salinger Stakes), Dalasan was tiering but still impressive to the line in the Group 3 $500,000 Network 10 Carbine Club Stakes (1600m).

Second in the Prelude on September 29, the chestnut was somewhat disappointing when fifth behind Super Seth in the Group 1 $2 million Ladbrokes Caulfield Guineas (1600m) last time out from the outside barrier (16 of 16).

Returning to Flemington where his latest start produced the Group 2 Danehill Stakes (1200m) win in mid-September, Dalasan was also back in winning form with the blinkers coming off.

Ace horseman Hugh Bowman retained the ride out of the Guineas and was thrilled to atone with the Carbine Club Stakes success on the 58.5kg top weight in the set weights plus penalties clash.

“We came in with high expectations.

“Full credit to the team coming back a step and preparing him for this race.”

Bowman had the favourite settled towards the rear of the field as Hilo led them around in the mile showdown, happy to take the sit.

Dalasan gave his rivals a start but in the end also gave them a beating, too good in the run to the line despite still looking very much like a work in progress.

He was very strong running over the top of them, fighting off the late challenge from John Sargent’s consistent colt Brandenburg who had to settle for second again after finishing runner-up to Colada in the Group 2 Stan Fox Stakes (1500m) in Sydney last start.

In third rounding out the Carbine Club Stakes trifecta was the other best in betting, the Anthony Freedman-trained Fastnet Rock colt Groundswell who also ran third in the Guineas Prelude and Caulfield Guineas in his two lead-up runs.