The country’s best young stayers will face off at Flemington Racecourse in the headline race on the opening day of the Melbourne Cup Carnival, our insider 2019 Victoria Derby tips and exotic selections detailed below. 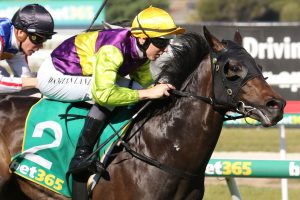 Of the runners in the stallion-making race, the latest Victoria Derby odds at Ladbrokes.com.au have two runners battling for favouritism: Shadow Hero ($3.20) and Thought Of That ($3.40).

Since the success of Efficient (2006) just two favourites in Victoria Derby betting have saluted for the punters.

Currently sitting top of the markets, Shadow Hero is in flying form chasing a third win on the trot.

The Mark Newhnam-trained Pierro gelding took out the Group 3 Gloaming Stakes (1800m) at Rosehill by 3.3 lengths before his elite level win in the Group 1 Spring Champion Stakes (2000m) on October 12.

Thought Of That looks the danger, the So You Think colt also coming off back-to-back wins.

The Ciaron Maher & David Eustace-trained up-and-comer is yet to face this class of rivals, but looked the goods taking out the Group 3 Norman Robinson Stakes (2000m) on Caulfield Cup Day by nearly four lengths.

If the rain comes, as it is predicted to do, Thought Of That will firm further in VRC Derby betting with strong form on Soft tracks to date.

Geelong Classic winner Long Jack ($19) meanwhile is the other runner with strong Soft-track form that could prove a value punt in the Victoria Derby this spring.

To help sort the pretenders from the genuine Victoria Derby contenders below are our exclusive Derby tips to take to Ladbrokes.com.au.

He is on the drift and from 2006 – 18 just three Derby favourites have saluted, but plenty to suggest Shadow Hero can get the job done again after the big effort in the Group 1 Spring Champion Stakes. Looks like he will run out the 2500m without a worry and always finishes off strongly. Josh Parr knows the horse well and think he is out of the right form race having defeated subsequent Cox Plate runner-up Castelvecchio by a length in the Sydney Group 1. Only worry could be if the track is wet, with all his career starts being on Good going.

No doubt the bookies are keeping this one safe, Thought Of That with the proven Soft track form the early Derby market mover. Son of So You Think went from an eight-length maiden win at Donald to the 3.75 length success in the Group 3 Norman Robinson (2000m). Rises in grade again but will stay all day so will be the one to beat over the distance. Linda Meech has been replaced by Mark Zahra, whether that is a plus or not remains to be seen. Has had three goes for a win and second on Soft tracks so the rain only furthers his chances.

On the quick back-up, Soul Patch is out to be the first Moonee Valley Vase – VRC Derby double winner since Efficient (2006). It’s a tough task on the seven-day turnaround but Keys’ Shamus Award colt was dominant taking out the 2040m lead-u by 2.5 lengths. Dwayne Dunn continues his association and looks a big Each Way chance.

Last start winner of the Listed Geelong Classic (2200m) this Murray Baker & Andrew Forsman-trained So You Think colt from NZ will relish the bad weather. Two placings from two goes on Soft going and the Kiwis always perform on the wet Melbourne tracks. Not sure how strong the Geelong form-line is, but if the rain comes Craig Williams’ mount is the one you’ll want a piece of even from the wide alley.