The son of Pierro is stepping up to the 2500m for the first time after chasing down Castelvecchio for a memorable win in last fortnight’s Spring Champion Stakes. Shadow Hero is now looking to make it three wins on the trot after a big win in the Group 3 Gloaming Stakes two weeks prior.

Newnham drew barrier 10 ahead of Saturday’s main event and was quickly installed as a $3.10 favourite in Ladbrokes’  Victoria Derby market. Now comes the hard part though as Newnham hopes his horse can stay the trip. 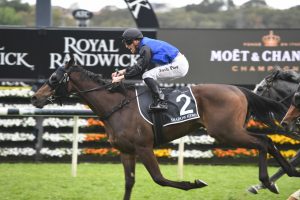 Jockey Joshua Parr has retained the ride on Shadow Hero after steering the horse to two wins and a place this prep. A win on Saturday will mark Parr’s seventh Group 1 victory, but he’ll have plenty of work to do aboard the favourite in his first start at Flemington.

“He’ll be midfield to three parts of the way back. That’s the way I see it. I don’t tie jockey’s down to too many instructions, once the gates open a lot of things change quickly” Newnham said of their race strategy.

“We don’t go out there with any set plan on being in any particular spot bar getting the horse comfortable. We’re confident that he’ll run the trip so it’s more a matter of conserving energy through the first 600m of the race. In a Derby you want to have clear air in front of you and then generally the best horse wins.”

Newnham has never won the Derby before, and although it remains one of the most prestigious races on the calendar, a win this year would be extra special considering how wide-open the field is.

Parr will lineup against two very talented stayers in the form Soul Patch, who backs up following a brilliant 2.5 length win in the Moonee Valley Vase last week, and Thought Of That, who was equally impressive in the Ladbrokes Classic (2000m) a fortnight ago.

Newnham went on to say that he knows the pressure is on, but has no doubt his horse can run a good race in his Flemington debut.

“Josh rode him on Tuesday morning, I had a ride on him last Saturday morning, he seemed to get on his right leg straight away. Race pressure is a different story, but Flemington, nice big flat open track, I don’t think he’ll have any problems” Newnham said.