One of the key early favourites in Victoria Derby 2019 betting for this weekend’s feature race at Flemington, Thought Of That has come up trumps with the inside alley for the $2 million clash. 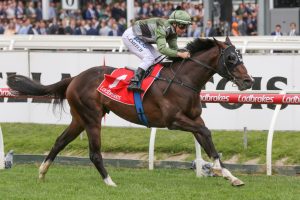 Thought Of That has drawn barrier one in the 2019 Victoria Derby field. Photo: Ultimate Racing Photos.

The Melbourne Cup Carnival kicks off with VRC Derby Day and a 16-horse field of three-year-old stayers has been released for the marquee event.

Well-bred So You Think colt Thought Of That will jump from barrier one chasing a third straight win.

The Ciaron Maher & David Eustace-trained galloper looks sure to handle the 2500m distance having annihilated his rivals by nearly four lengths last time out in the Group 3 Caulfield Classic (2000m) on Caulfield Cup Day.

Linda Meech has been replaced by Mark Zahra for the Group 1, Zahra after his first win in the stallion-making classic.

“He’s really enjoying his racing. He’s in super order and I think he’ll improve into the Derby as well,” co-trainer Maher said of Thought Of That this week.

The other in-form three-year-old coming off back-to-back wins ahead of the Group 1 $2 million AAMI Victoria Derby (2500m) is the Mark Newnham-trained Shadow Hero.

Jumping from barrier 10 with Joshua Parr aboard, Shadow Hero is the early favourite in Victoria Derby betting at Ladbrokes.com.au following his excellent lead-up form this prep.

The consistent Pierro gelding has won three of his six career starts including the Group 1 Spring Champion Stakes (2000m) at Randwick as the odds-on favourite last time out.

The Spring Champion Stakes – VRC Derby double was recently completed by Ace High (2017) and there is plenty to suggest Shadow Hero can repeat the feat in 2019.

The form out of the Spring Champion Stakes was franked last Saturday when the runner-up Castelvecchio finished a brave second behind the Japanese-trained Cox Plate winner Lys Gracieux.

Since 2006 just two favourites in Victoria Derby betting have won, but there is sure to be money on Shadow Hero to be the next with Newnham confident his horse will get the distance.

“It’s new to all the horses but I don’t think he will have any trouble getting the distance,” he told AAP.

“He’s fit and well and has settled in nicely.”

The Ken Keys-trained Soul Patch is the other shortest-priced in the Victoria Derby odds following the Shamus Award colt’s Cox Plate Day win.

Taking his record up to three wins and a second from five starts, Soul Patch improved on an eighth in the Group 1 Caulfield Guineas (1600m) racing into Derby contention with a dominant two and a half-length victory in the Group 2 Moonee Valley Vase (2040m).

Efficient (2006) was the last Moonee Valley Vase winner to back-up and take out the Victoria Derby on the short turnaround.

Another So You Think colt, the Murray Baker & Andrew Forsman-trained Kiwi raider Long Jack is the other last start winner in the Victoria Derby field for 2019.

The improver earned his shot at the Group 1 won by Baker with the ill-fated Lion Tamer back in 2010 with his strong victory in the Listed Geelong Classic (2200m) on October 23.

Long Jack won from barrier 13 of 16 that day and has another wide gate to overcome in the Group 1 with Craig Williams to ride from the outside alley (16 of 16).

See below for the full Victoria Derby 2019 field and barriers, updated markets now available at Ladbrokes.com.au.