The real Kubrick was on show at Randwick in Sydney while the Cox Plate Day action played out interstate, Chris Waller’s class colt atoning for his Caulfield Guineas flop to take out the inaugural running of the $1 million Bondi Stakes (1600m). 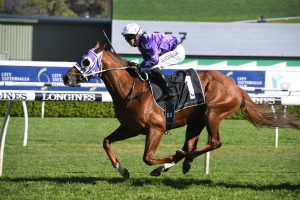 In Melbourne a fortnight back the son of Shooting To Win had zero luck when running 14th of 16 runners in the Group 1 Ladbrokes Caulfield Guineas (1600m).

Kept at a mile, the former Group 1 runner-up returned home to Sydney for his Royal Randwick debut in the new three-years-old The Everest Carnival feature.

Seven days earlier Team Waller won the $14 million The Everest with Yes Yes Yes and he was back on top with another ace three-year-old in the Bondi Stakes results.

It was a gutsy ride by Brenton Avdulla who had only inches to work with up the straight aboard Kubrick who he took to the inside.

Avdulla kept persevering for that inside run, squeezing through the narrowest of gaps right along the fence to charge home and win the Bondi Stakes ahead of the fellow Waller-trained Pancho.

Also coming off a lead-up win was the Gerald Ryan-trained son of Brazen Beau Colada, the speedster having taken out the Group 2 Stan Fox Stakes (1500m) at the track in record time on October 12.

Taken across from the outside gate, Colada led the Bondi Stakes field around showing the way with apprentice rider Robbie Dolan happy to let his mount go with the pacemaker holding on to finish third.

“It’s always nice to ride a winner and to win a million-dollar race is even better.

“He had the right form…I just forgave him the other day [in the Guineas].

“Blinkers on, mater trainer, always gets ‘em spot on.”

The Waller stable was represented trackside by Charlie Duckworth who was also pleased to take out the Caulfield Guineas consolation in the Bondi Stakes.

“Not bad at all. Obviously any million-dollar race is very hard to win,” he said.

“He probably didn’t have the most amount of luck…we’re very luck to have a tough colt like him who relished the challenge.