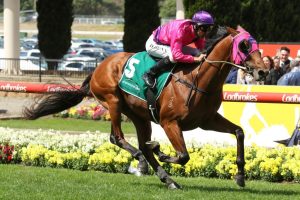 A well-bred son of 2013 Cox Plate winner Shamus Award, Soul Patch honoured his sire saluting at the same track / distance in the 2019 Moonee Valley Vase looking improved with the blinkers on for the first time.

Jockey Dwayne Dunn won the race aboard Rekindled Interest back in 2010 and nine years on was thrilled to partner Keys’ $45,000 bargain buy Soul Patch for another Vase success.

Today he donned the blinkers and stepped-up in distance flying home to defeat class filly Moonlight Maid – last start winner of the Group 2 Edward Manifold Stakes – by two and a half lengths, while Serious Liaison finished off the trifecta in third.

“His sectionals in the Guineas were awesome.

“He just needed the blinkers to try and put him into the race.

“we wanted to see him run the trip and no doubt we have the Derby in mind for him.

“He really powered away late. We really like the horse and Kenny’s found another nice one.”

The first two past the post in the Moonee Valley Vase results both came from the back of the field, Moonlight Maid having swept late to finish off well as the cream of the crop rose to the top.

Dunn rode Soul Patch with a lot of confidence giving the up-and-comer a patient and perfectly-timed ride off the pace near the rear as Fabulanski led the Vase field around.

The hoop allowed the eventual Vase winner to settle right back before taking his time to wind-up before really letting down on the short home straight to explode through the line.

Ridden conservatively, Soul Patch finished off stylishly looking the goods ahead of a likely run at Flemington in seven days’ time in the Group 1 $1.5 million Victoria Derby (2500m).

“The blinkers obviously switched him on a bit today.

“The ride and the race just panned out beautiful.

“He’s a nice type of horse…he’s a fast horse, he just wasn’t picking up the bridle quick enough, so we had to do something [adding the blinkers].

“I couldn’t have planned it better…as I dreamed last night.”

The 2019 VRC Derby odds at Ladbrokes.com.au have subsequently firmed on Soul Patch from $14 into $4.