Previously a triple-figure roughie for the 2019 Melbourne Cup, Aidan O’Brien’s Irish raider Hunting Horn raced right into contention for the mile and a half classic with a barnstorming Group 2 $500,000 Moonee Valley Gold Cup (2500m) win on Cox Plate Day. 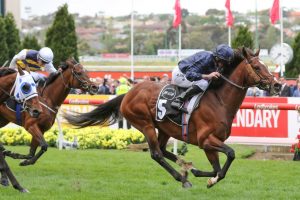 Five years ago O’Brien and jockey Ryan Moore combined to win the Group 1 Cox Plate with Adelaide (2014) and they were back in the winners’ stall at The Valley this year with Camelot entire Hunting Horn.

Posting his first win since a Group 3 at Ascot as a European three-year-old in June of 2018, Hunting Horn relished the steady pace set in the Moonee Valley Gold Cup set by Chris Waller’s Sydney Cup winner Shraaoh.

Shraaoh bowled along in front controlling the speed, leading from the other Irish visitor in the mix Downdraft prepared by O’Brien’s Melbourne Cup winning son Joseph.

Moore meanwhile had Hunting Horn settled fourth just behind last year’s winner Ventura Storm who got the cushy ride throughout box seating third on the fence.

The pace quickened late and it was a dash to the post in the Moonee Valley Gold Cup, Hunting Horn hitting the front with 200m to go as Mr Quickie from a midfield positioned tried to wear him down.

Hunting Horn ($4.20) though was too good finishing 1.25 lengths ahead of the Phillip Stokes-trained Mr Quickie ($3.80F) who had missed out on a Cox Plate run with Downdraft ($3.90) a close third rounding out the MV Cup trifecta.

“He’s a lovely colt. He had very good form all the way through and he’s had some tough assignments,” Moore said post-win.

Prior to the Moonee Valley Gold Cup results Hunting Horn was a $101 roughie in all-in Melbourne Cup betting at Ladbrokes.com.au for the $8 million handicap at Flemington on November 5.

He has subsequently been slashed into 2019 Melbourne Cup odds of $21 to continue the excellent recent record of northern hemisphere raiders in the ‘race that stops a nation’.

Mr Quickie remains a $34 chance to step out over the two miles and win the Melbourne Cup, while Downdraft sits at $51 far from assured a run sitting 35th on the order of entry with 53.5kg.

Hunting Horn is 20th on the Melbourne Cup ballot with 55kg but will receive a weight penalty for the Moonee Valley Gold Cup victory.

No horse has done the Moonee Valley Gold Cup – Melbourne Cup double in the same year since Kingston Rule (1990).