Chief Ironside Comes Out on Top in 2019 Crystal Mile

It was a big day for the internationals at Moonee Valley on Saturday as Chief Ironside claimed the Group 2 Crystal Mile (1600m) in a memorable boilover. 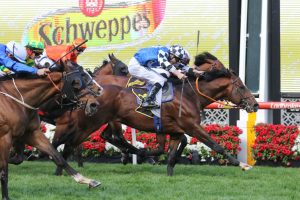 The British raider was second-up in Australia after failing to run a place in the Group 1 Toorak Handicap (1600m) a fortnight ago at Caulfield. Chief Ironside wasted no time improving on his form however, as jockey Jamie Spencer found the perfect spot at the final turn to kick home strongly.

Chief Ironside had won only two of his 14 career starts coming in but showed a tremendous turn of foot to put away a very classy field. Defending Crystal Mile champ Cliff’s Edge hit the long strongly at the 200m, only for jockey Jamie Spencer to spoil the party.

“He had a beautiful trip around, got cover, a little bit gassy around the first turn but then settled into it, and he needed every yard of the straight to get there,” Spencer told Racing.com after the race.

“He’s always been an on the pace horse in Europe, so I wasn’t worried that he wouldn’t run positive. He can play up in the gates which happened last time at Caulfield. You’re just hoping that he can get a good beginning and then hope the race goes smoothly, which it did for me.”

Spencer went on to say that he thought the soft track at Moonee Valley played to European horses’ strengths, a factor that also helped Hunting Horn win the Moonee Valley Cup in the race prior. Chief Ironside enjoyed a peach of a ride from Spencer on Saturday proving to everyone that internationals can adjust to Melbourne tracks rather quickly.

Cliff’s Edge was brave late, while Debt Agent looks one to watch after making a big run towards the line late.