Broadwayandfourth Puts on a Show with Promising Crockett Stakes Win

Trainer Mitchell Freedman looks to have a serious filly on his hands in the form of Broadwayandfourth.

The three-year-old by Smart Missile went around at double-digit odds in the Listed Crockett Stakes (1200m) at The Valley on Saturday but surprised everyone by racing down the favourite Villami over the final furlong.

Broadwayandfourth had only two runs under her belt prior to Saturday’s start – a placing at Geelong back in September followed by a maiden win at Ballarat three weeks ago. The form hardly stacked up for a win on Cox Plate day, but the horses turn of foot was never in question. 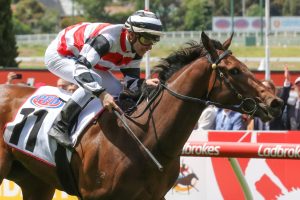 Broadwayandfourth looks to be a horse to follow heading into the 2019 Autumn Carnival. Photo Credit: Ultimate Racing Photos.

While the result turned out in favour of Freedman, it certainly wasn’t an easy watch. A lack of early gate speed left jockey Ben Melham with plenty of work to do from the back, but Broadwayandfourth’s class eventually shone through as the pair shifted to the inside to find daylight.

“It was a very good win. She’s a very talented filly, doesn’t do a lot wrong” Melham said after the win.

“Hasn’t got a lot of early gate speed and doesn’t break that well, I knew she had the class and she had the right run, but just didn’t know where she’d wind up in the run.

They weren’t quick enough. It was a bit of a messy race and I was able to avoid some trouble there on the corner. She let down, she’s a very promising filly.”

Villami looked home after rounding the bend with plenty left to give. Jockey James McDonald didn’t do a lot wrong, but after showing some initial kick, it still wasn’t enough to stop Melham from r

A soft trail between runs certainly played a part in keeping Broadwayandfourth fresh for Saturday’s run. Freedman didn’t say whether he had another race in mind for the Spring, but did say he had an eye towards the Autumn.

She had a good gallop on the grass at Ballarat, all the guys at home know she’s not the easiest horse to deal with – she didn’t want to come back to the yard there. But she’s a really strong filly and we’ve got some good targets for her in the Autumn” Freedman said.