Jockey Damian Lane made it three majors for the year and back-to-back Group 1 wins on successive Saturdays partnering the well-supported favourite Lys Gracieux from Japan to take out the Group 1 $5 million Ladbrokes Cox Plate (2040m). 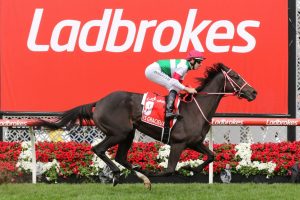 Lane also rode the Golden Slipper winner earlier in the year and became the first hoop in history to do the Slipper – Caulfield Cup – Cox Plate treble in a single season.

Prepared by Yoshito Yahagi, six-year-old Heart’s Cry mare Lys Gracieux was heavily-backed in Ladbrokes Cox Plate betting and did not disappoint the punters.

Last start winner by three lengths in the Group 1 Takarazuka (2200m) back home in June, the superstar also secured a $2 million Ladbrokes bonus after dominating the 2019 Cox Plate results.

Irish raider Magic Wand led the Cox Plate field around with Black Heart Bart on her outside, while one-time favourite Mystic Journey was given every chance box seating in third.

The quick early pace and nasty wide alley meanwhile forced Lane to settle back worse than midfield on Lys Gracieux.

As they approached the turn for home, jockey Craig Williams got going on the lightweight three-year-old Castelvecchio who started his run around the outside.

The youngster was fully charged and flying home, but the mare from Japan was running on hot on his heels.

Coming from a spot she looked no hope from, Lys Gracieux with the bigger weight had to get to the outside and despite getting off balance around the corner, went straight past Castelvecchio to make Cox Plate history.

The first Cox Plate winner since the Winx four-peat, Lys Gracieux joined the then Irish-trained Adelaide (2014) as the only northern-hemisphere champions in the Australasian weight-for-age championship.

“Unbelievable. To grow up as a racing fan watching this race and watching my idols win this race, to now be on the honour roll is such a privilege,” an ecstatic Lane said post-win.

“The pace was a lot stronger than I thought it would be to the first corner. I just rode her back. She got a bit keen when the pace came out of the race but gee I was confident once I got her out down the straight.

“She probably didn’t get around the track too well but was just too good anyway.”

It was also an honour for Yahagi who was at Moonee Valley over 30 years ago for the historic third straight Cox Plate victory by Kingston Town in 1982.

“I honestly thought she wasn’t going to make it from there. Damian Lane was there in Japan and rode this mare, the role started from there and came to here, it was super important. I think I mentioned a few times that I was here when Kingston Town won back in 1982, so I finally came back home to win a Cox Plate and it meant a lot to me,” Yahagi said via a translated after the race.

Defeated hoop Williams was full of post-race praise for the runner-up Castelvecchio who was so brave in defeat having his first start in open-age company.

“Wow, he was so awesome in defeat. The Japanese brought the right form. Credit to my trainer, Richard Litt, he did a great job. He was so confident that what we had on Tuesday morning, he’s a serious racehorse when it comes to having the blinkers on,” Williams said.

“I love the way he put himself in a forward position. I actually had to come back just to get him to relax because he was trying to overdo it a little bit.

“He got into a nice rhythm, travelled inside the 600m, he towed me there so I thought ‘well, we’ll see if the Japanese mare’s form is as good as suggested’. Unfortunately she was, but wow. He’s going to be a star of our carnivals to come.”

“He ran a blinder. He got back from the draw and was good late. Had to stay to the inside and couldn’t get out. Full credit to him. It was a good run,” he said.

As for Lane, his attention now turns to the Group 1 $8 million Lexus Melbourne Cup (3200m) where he will reunite with the Caulfield Cup winner Me De Glace a $10 shot through Ladbrokes.com.au to continue the jockey’s fairy-tale season.