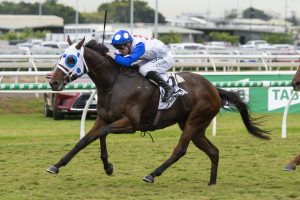 It has been a hard couple of runs for the Phillip Stokes-trained Shamus Award four-year-old Mr Quickie who is after atonement in the Group 2 $500,000 Moonee Valley Gold Cup (2500m) this weekend.

Mr Quickie was under five lengths beaten in both of those unplaced losses and drops notably in grade for his Cox Plate Day assignment.

The Queensland Derby winner is also the second emergency for the Group 1 $5 million Ladbrokes Cox Plate (2040m) having been left out of the 14-starer field by the committee due to his luckless performance in the Caulfield Cup.

The latest Moonee Valley Gold Cup odds at Ladbrokes.com.au have the million-dollar earner as the firming $2.90 favourite from barrier one despite the chance he and hoop Luke Nolen could get trapped along the fence at the tight track.

The Moonee Valley Gold Cup is a key lead-up for horses chasing a start in the world’s richest handicap, the Group 1 $8 million Lexus Melbourne Cup (3200m) over the two miles at Flemington on November 5.

Kingston Rule (1990) was the last horse to do the MV Cup – Melbourne Cup double, but more recently the 2014 MV Cup winner Prince Of Penzance ran second in the race in 2015 before his boilover in the Melbourne Cup at 100/1 odds.

Currently Mr Quickie sits at Melbourne Cup odds of $34 through Ladbrokes.com.au already looking very likely to make the 24-horse field sitting 25th on the latest Melbourne Cup order of entry should connections chose to stretch him out over the distance.

In a slight hiccup however, the horse showed signs of being lame in his near fore forcing a vet inspection to take place on Friday before the Cup run.

Three other runners are under $10 in Moonee Valley Gold Cup betting for Saturday including Humidor ($4.20) and market mover Downdraft ($4.80) for OTI Thoroughbreds.

It has been a while between drinks for the Ciaron Maher & David Eustace-trained Teofilo seven-year-old Humidor whose last victory was in the 2018 Memsie Stakes over 12 months ago.

He’s been competitive in plenty since however including finishing third in the Cox Plate on this day last year behind the champion Winx for her incredible fourth victory.

Humidor ran 10th three times on the trot to kick off his shaky spring in the Memsie, Makybe and then Group 1 Underwood Stakes (1800m) before an improved run when 1.8 lengths back fifth in the Group 1 Caulfield Stakes (2000m) on October 12.

A drop in grade has Humidor running better again here with the galloper sure to be powering to the line late over the extra distance.

Like Mr Quickie, Humidor was being set for the Cox Plate again in 2019 but was declared an emergency for the weight-for-age classic.

He needs just one scratching however to make the iconic event, betting for which is led by the Japanese raider Lys Gracieux.

Early money is coming for the international raider Downdraft, the Joseph O’Brien-trained Irish galloper on debut down under using the race as a springboard into the Melbourne Cup.

O’Brien took out the ‘Loving Trophy’ two years ago with Rekindling winning the 2017 Melbourne Cup and this year his Irish St. Leger placegetter Downdraft is a $51 shot in all-in betting for the ‘race that stops a nation’.

So far the northern-hemisphere form has been hard to beat in Melbourne this spring and there’s plenty to suggest this untapped stayer can surprise the locals fresh getting in well in the weights.

Hunting Horn ($8.50) is the other Irish galloper being kept safe in betting, Ryan Moore to ride the horse prepared by Aidan O’Brien.

“He is in good order,” O’Brien’s stable foreman T.J. Comerford told The Age this week speaking of Hunting Horn.

The only horse not among the latest Melbourne Cup entries contesting the MV Cup this weekend is the defending champion Ventura Storm.

See below for the full Moonee Valley Gold Cup 2019 field and barriers, the latest odds for which are available here courtesy of Ladbrokes.com.au.