The sole three-year-old in the Ladbrokes Cox Plate 2019 field Castelvecchio is the early market mover in betting on the $5 million weight-for-age classic at The Valley this weekend. 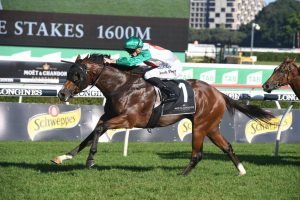 It is a typically class field gathered for the Group 1 Ladbrokes Cox Plate (2040m) on Saturday with the Richard Litt-trained Castelvecchio looking to become the first three-year-old Cox Plate winner since Shamus Award (2013).

Three-year-olds have a gun recent record in the Cox Plate results with Savabeel (2004) and So You Think (2009) also saluting as three-year-olds in the past 20 years.

Winner of the Group 1 Champagne Stakes (1600m) as a two-year-old, the Dundeel colt is fourth-up in the Cox Plate field having his first run in open-age company.

Also running the Melbourne way for the first time for his interstate debut, the Sydney-trained bay was last seen finishing second in the Group 1 Spring Champion Stakes (2000m) on October 12.

Sure to handle the distance and The Valley track looking a non-issue after his good work there through the week, Castelvecchio drops from 56.5kg last time out to just 49.5kg taking on the older horses in Australasia’s weight-for-age championship.

After opening at Cox Plate odds of $12 through race sponsor Ladbrokes.com.au, Castelvecchio has subsequently firmed right into $8 and is a definite danger over the distance.

Hot favourite in Cox Plate betting in the post-Winx era though is the highly-rated Japanese raider Lys Gracieux ($3.60).

Despite a wide draw, plenty of money is coming for the Yoshito Yahagi-trained Heart’s Cry mare to salute here first-up on the back of a Group 1 victory over 2200m in one of the toughest WFA races in Japan.

Last Saturday jockey Damian Lane rode Japan’s Mer De Grace to victory in the Caulfield Cup and he will look for another Melbourne elite level on a Japanese-trained star with the ace ride in the Cox Plate.

The then Irish-trained Adelaide (2014) remains the sole northern-hemisphere trained Cox Plate winner out of the 20 to line-up in the 2040m event.

Lys Gracieux is tipped to join Adelaide (2014) as the sole Cox Plate winners trained in the northern hemisphere Bet now with Ladbrokes.com.au

Drawn a gun gate (6), the Australian Guineas – All-Star Mile winner is out to bounce back after a lead-up fifth in the Group 1 Turnbull Stakes (2000m) at Flemington on October 5.

The Turnbull was a forgivable loss for the daughter of Needs Further who got too far back in the run.

She is tipped to settle closer, just off the speed, from her ideal barrier in the Cox Plate chasing atonement.

Four-year-olds boast the most Cox Plate wins of any age group with 30 victories to date, including five of the past nine with Winx (2015) the most recent when taking out the first of her eventual four Cox Plate trophies.

Looking value at $10 the next best in the Cox Plate markets is then the Godolphin-raced Avilius who is drawn barrier seven but sure to jump from the race’s most successful barrier – six – once the emergencies come out.

Since 1939 barrier six has produced 11 Cox Plate winners and there is money on Pivotal six-year-old Avilius to be the next on the back of his Group 1 Caulfield Stakes (2000m) fourth off a quiet ride.

Before that he won the Group 1 George Main Stakes (1600m) and he looks at peak fitness with the four spring runs behind him.