The seven-figure features continue in Sydney this weekend with Royal Randwick hosting the inaugural $1 million Bondi Stakes (1600m) race where Just Thinkin’ is tipped to take out top honours in the new mile feature. 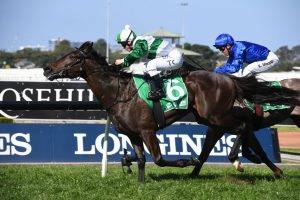 Just Thinkin’ is tipped to win the inaugural edition of the Bondi Stakes at Randwick. Photo: Steve Hart.

As the interstate racing rivalry between Sydney and Melbourne during the spring heats up, the 2019 Bondi Stakes will be vying for the punters’ attention on Saturday with the Group 1 $5 million Ladbrokes Cox Plate at The Valley across the border.

The consistent So You Think gelding won back-to-back Sydney races earlier this prep before finishing fourth behind Shadow Hero in both the Group 3 Gloaming Stakes (1800m) and Group 1 Spring Champion Stakes (2000m).

That Spring Champion Stakes form from October 12 is now tipped to stack up in both Sydney and Melbourne this weekend.

The runner-up Castelvecchio takes on a star-studded field of older weight-for-age champions in the Cox Plate 2019, while third placegetter Battenburg is favourite in the Group 2 Moonee Valley Vase on the same card.

Up in Sydney it will be up to Just Thinkin’ to win for the punters with the galloper sitting top of the Bondi Stakes odds at Ladbrokes.com.au paying $3.90 after drawing a treat in barrier two.

In a wide-open Bondi Stakes betting market there are a further four single-figure hopefuls including Bottega ($4.60) and early mover Kubrick ($4.50).

Bottega jumps from barrier six with big race star Glen Boss in the saddle of the Gerald Ryan-trained Snitzel colt.

The bay won his first two career starts before rising in grade on October 12 for an eye-catching third behind stablemate Colada who set a new record winning the Group 2 Stan Fox Stakes (1500m) at Randwick in 1 minute 27.43 seconds.

Drawn the rails, Chris Waller’s Shooting To Win colt Kubrick is out for atonement after his disappointing 14th to Super Seth in the Group 1 Caulfield Guineas (1600m) last time out.

The mile in Group 1 grade in Melbourne from barrier 15 of 16 all worked against the previous Group 1 placegetter who should be on the improve back to this company in Sydney.

The aforementioned Stan Fox Stakes winner Colada rounds out the hopes under $10 to win the Bondi Stakes, Ryan’s in-form son of Brazen Beau looking to prove that impressive two length win as a $21 roughie was no fluke.

Robbie Dolan retains the ride, Colada remaining a huge chance to salute again even from the wide alley (10) at generous odds ($8.50).

See below for the full Bondi Stakes 2019 field and barriers, the latest odds on the $1 million feature available here thanks to Ladbrokes.com.au.