The Charlie Fellowes-trained Prince Of Arran looks a strong chance to move up the order entry ahead of next fortnight’s Melbourne Cup (3200m) after claiming a convincing victory in the Geelong Cup (2400m).

The seven-year-old was outstanding on Wednesday saluting for punters who loaded up on the favourite. After a slow tempo was set in the early goings, Prince Of Arran once again showed the same dazzling turn of foot down the straight that Australian racing fans have come to expect. 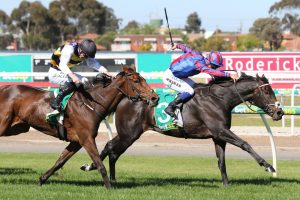 Jockey Michael Walker had some work to do as he got on the whip with a furlong to go. True Self, who was the late market mover with Ladbrokes.com.au, posed a real threat on the outside, but Prince Of Arran had just enough left to go on and win by a head.

Prince Of Arran showcased the same speed a fortnight ago at Caulfield when second in the Group 2 Herbert Power Stakes (2400m) behind The Chosen One. Now, he and jockey Michael Walker will be hoping to improve on their third placing in last year’s Melbourne Cup in a fortnight’s time.

“Hopefully we get a run in the Cup now. He did it the hard way,” Walker said following Wednesday’s win.

“People were changing their tactic in the race wanting to go forward with Haky wanting the speed. I was in the gates thinking ‘this is going to be a disaster’, because he doesn’t usually jump that good. Twice he didn’t jump good, Melbourne Cup last year and today. I got there so easy, but I’m doing it the hard way because I’m doing all the donkey work bringing the field up to the leader. He was off the bit at the corner but as soon as he hit the straight he shot out. He’s got a heart bigger than anyone on this course today.”

Only three horses have completed the Geelong Cup-Melbourne Cup double since the year 2000. Prince Of Arran is now hoping to join Media Puzzle (2002), Americain (2010) and Dunaden (2011) in making history on the first Tuesday in November.

Bookmakers at Ladbrokes.com.au have already acted accordingly firming Prince Of Arran from $31.00 into $16.00 in their All-In Melbourne Cup betting market.