It was a great thrill for Canberra-based horseman Keith Dryden at Royal Randwick on The Everest Day with this quality four-year-old Handle The Truth saluting in the 2019 The Kosciuszko results. 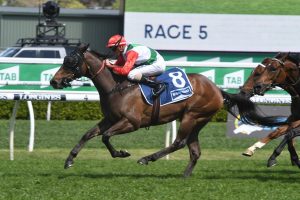 Handle The Truth enjoyed a nice win in the 2019 The Kosciuszko on The Everest Day in Sydney. Photo: Steve Hart.

A four-year-old son of Star Witness, Handle The Truth was one of the 14 NSW country-trained gallopers representing their respectively slot-holders in the $1.3 million The Kosciuszko (1200m).

In the second running of the Special Condition feature, Handle The Truth jumped from barrier seven with Nash Rawiller in the saddle settling in a nice mid-field position.

There was an early battle for the lead with the fast-into-stride Notation joined by Star Boy who kicked well chasing the front position.

Eventually it was Don’t Give A Dawn who got up on the inside of Notation to lead The Kosciusko field around as Star Boy couldn’t get across settling back in third.

Race favourite Victorem meanwhile was well back in the field right up until the straight when jockey Tommy Berry got one off the fence looking to get into the clear aboard the returning Jenny Graham-trained Group 1 performer.

Victorem was winding-up with his run, but it was Handle The Truth who came with the best late run from sixth after settling, the gelding holding strongly right to the line in a big thrill for connections.

“I had the winner’s back in the run. At the top of the straight I thought I was going to pick him up quite easily but, on that firm track, he just struggled to catch him late. The horse is going well, he was only first up and he’s going to take a lot of improvement out of it,” beaten hoop Berry said of Victorem’s run.

A patient ride from Rawiller saw Handle The Truth from the nation’s capital sit just off them and off that beautiful run, once the horse peeled out there was no stopping him.

On the line The Kosciuszko winner Handle The Truth ($7) had a length to spare over the beaten favourite Victorem ($.270), while the trifecta was rounded-out by roughie hope Bobbing ($26).

“What a great effort. He set this horse for this 12 months ago. It’s amazing,” winning hoop Rawiller said.

“We had a lovely run throughout. He was strong late.”

Handle The Truth has now won seven of his 13 career starts with The Kosciuszko result seeing his prize money shoot up over $1 million.

A winner at Rosehill at the end of last season, the galloper improved on a lead-up fifth at Randwick on October 5 continuing his great form in the race he had been set specifically for.

“This is the biggest prize money we’ve ever won,” Dryden said post-race.

“27 owners in the horse…then the ticket or slot holders, 25 of them.

“I told you months ago what I was doing. I didn’t believe I could come in without a run under our belt. Too tough.”

There’s a chance now that Handle The Truth could head south to Melbourne for a shot at another spring victory before going out to the paddock.

“We might go for a minor race in Melbourne. I haven’t thought that far ahead. I was trying to win this race first. We’ll see how we go.”