The official line-up for the $14 million The Everest race this Saturday at Royal Randwick has been confirmed with the barrier draw for the world’s richest turf race to take place on Tuesday night. 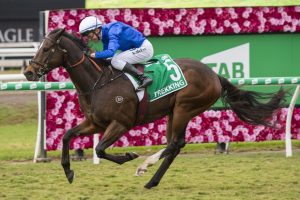 Trekking is an outside hope in 2019 The Everest betting on the short back-up out of the Schillaci. Photo: Steve Hart.

All 12 slots in the buy-in Sydney feature were filled over the weekend when Godolphin confirmed their Schillaci Stakes winner Trekking would run for the MRC / ATC a week later in The Everest field.

Trekking came from well back in the field to fly home late over the top of last year’s winner Ball Of Muscle in the Group 2 Schillaci Stakes (1100m) at Caulfield last Saturday.

Trainer James Cummings was subsequently pleased with the way the Street Cry five-year-old came through the run, confirmed he would take up the ‘win and you’re in’ slot in The Everest 2019.

“While we are conscious of all that, the welfare of the horse is paramount, and we are pleased to report that he recovered well post-race and he is in very good condition this morning,” he said.

The winter’s Stradbroke Handicap champ over 1400m, Trekking is now a $21 outsider in The Everest betting at Ladbrokes.com.au to salute again on the short seven-day turnaround with jockey Josh Parr confirmed for the ride.

Godolphin are also represented in The Everest field with their slot filled by the fellow Cummings-trained Alizee who will be ridden by Hugh Bowman.

A $12 shot in The Everest odds, the three-time Group 1 winning mare has been kept fresh since her third in the Group 1 Memsie Stakes (1400m) at Caulfield in late August with a subsequent trial win at Randwick on September 27 keeping her fit.

“Alizee is a high-class mare who has shown excellent form when fresh,” Vin Cox, Managing Director of Godolphin in Australia, said.

“She has shown us in her training and in a recent barrier trial that she is in great form and it’s our belief that she offers us an outstanding chance in this great race.”

Santa Ana Lane (TAB) has now firmed into the $4.60 favourite to win The Everest, the Anthony Freedman-trained $5.28 million earner second-up in the race.

Chasing his first win since the Group 1 TJ Smith Stakes at The Everest track and distance in the autumn, Santa Ana Lane resumed on October 5 at Flemington defeating Sunlight when carrying 60kg to victory in the Group 2 Gilgai Stakes (1200m).

The seven-year-old ran sixth on a Heavy track in last year’s The Everest and assistant trainer Sam Freedman said the team were after redemption.

“We’re here for redemption, and hopefully he can put his best foot forward,” he said.

The dangers at the next shortest The Everest odds pre-barrier draw are the Gregory Hickman-trained Pierata ($5), saved from retirement to run in the feature, and Chris Waller’s WA expat Arcadia Queen ($5.50).

Five-year-old Pierro stallion Pierata has outstanding form over the distance (8:4-1-1) and was last seen defeating a field of The Everest horses in the Group 2 The Shorts (1100m) on September 21.

Arcadia Queen is also by champion sire Pierro, the four-year-old mare a winner of six of her seven career starts to date with the runaway Group 1 Kingston Town Classic champ returning on September 14 to take out the Group 2 Theo Marks Stakes (1300m) in Sydney.

The Peter & Paul Snowden-trained Redzel meanwhile pays $10 to make history with a three-peat in The Everest, the two-time defending champion coming back for a shot at three consecutive victories.

He is third-up after winning the Group 3 Concorde Stakes fresh before his close third when under a length back in The Shorts.

See below for the confirmed 2019 The Everest horses with betting available here thanks to Ladbrokes.com.au. 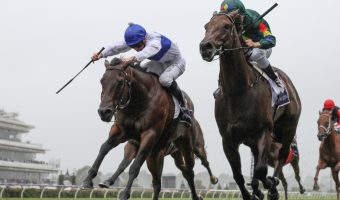