Peter and Paul Snowden look to have a very talented filly on their hands after three-year-old California Zimbol caused a big upset in Saturday’s Group 3 Thoroughbred Club Stakes (1200m) at Caulfield.

The $4.00 pop surprised everybody down the straight beating home short-priced favourite Loving Gaby. In the end, it was a comfortable two-length victory for the I Am Invincible filly and one that could lead to a Group 1 start sometime in the coming weeks.

Originally California Zimbol looked a little too keen sitting two wide off the rails at the 800m mark. Loving Gaby shifted up into third at the 650m but looked disinterested in taking up the lead in the final stages. 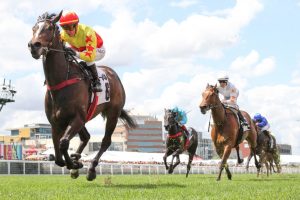 A gun ride from jockey Kerrin McEvoy certainly helped as California Zimbol switched off beautifully over the final furlong. The pair found themselves on the right foot, even though McEvoy admits the horse was a little aggressive early on.

“I wanted to settle second, but the leader at the time wasn’t going quick enough for me, so I had to meet the filly halfway and once we got to the front, she switched off nicely and relaxed better for me,” McEvoy said after the race.

“She’s done nicely, she raced nicely up in Brisbane without winning and I know the stable have always had a high opinion of her, so well done for bringing her down here and to have a crack at a nice race.”

California Zimbol was second-up at Caulfield on Saturday after running second in the Listed Oxlade Stakes (1200m) at Doomben back in June.

Trainer Peter Snowden went on to echo McEvoy’s thoughts, saying the time spent up in Queensland down his horse some good.

“This filly we’ve always had a big opinion of her. Probably the making of her was going to Brisbane just to recover racing in the last carnival, but since she’s come back, she’s been a more mature horse. She’s really furnished that big frame she’s had; she’s filled out all over” Snowden said.

Still looking fresh with plenty of turn of foot, the Group 1 Coolmore Stud Stakes (1200m) on November 2 at Flemington could now be an option, although Snowden said he’s happy to weight up his options at a later date.

“She was very, very dominant, she pulled right away late so that’s a good sign. There’s some nice fish to fry down here hopefully in the next three weeks and she’s going to be very competitive after that win today.

“I’ll just have a little bit of a look tomorrow, but she’ll be down here for the next three weeks. She’s a very talented filly and this won’t be the last time you see her in the winner’s circle, that’s for sure” Snowden went on to say.

The I Am Invincible filly currently holds a nomination ahead of next fortnight’s Group 1 Ladbrokes Manikato Stakes (1200m) under lights at The Valley and be had at $12.00 odds through Ladbrokes.com.au here.