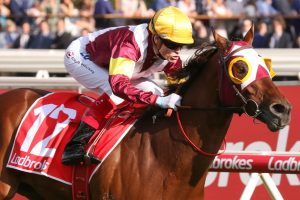 Smith won his first elite level back in 2011 with bonny mare Hurtle Myrtle in the Myer Classic (1600m).

He was back on top with his well-bred Deep Impact six-year-old Fierce Impact in the Group 1 $500,000 Toorak Handicap (1600m) on Caulfield Guineas Day eight years later.

The entire hadn’t won since the Group 3 Summer Cup (2000m) at Randwick in December last year.

The horse improved on a lead-up second behind Kolding when first-up at the same Sydney track on September 21 in the Group 3 Bill Ritchie Handicap (1400m).

Fierce Impact ran eighth behind Land Of Plenty in last year’s Toorak Handicap results and was back racing in Melbourne for the first time since when winning the same race 12 months on.

The star-studded Toorak field was led around by Cliff’s Edge who held the front spot into the straight going for home at the 250m mark.

Quickly on the scene was the Craig Williams-ridden Fierce Impact ($18) who took the lead and charged home down the centre of the track to a one and three-quarter length win over the Chris Waller-trained equal favourite Night’s Watch ($7).

In third rounding out the Toorak Handicap trifecta in another brave run was the Mathew Ellerton & Simon Zahra-trained He’s Remarkable four-year-old Age Of Chivalry ($9) coming off a second in the Group 1 Sir Rupert Clarke Stakes (1400m).

Luck and tactics came into play in the Toorak with Fierce Impact securing a lovely spot during the run before Williams got out on him with time to get home.

“He was awesome. He was very dominant today in his win.

Smith was thrilled with the win by Fierce Impact, one of his favourite horses, who is now worth a huge sum at stud being by a star stallion.

“It’s always good to come down to Melbourne and pinch a good race,” Smith said.

“This horse has been promising for a long time so it’s just so pleasing to get the job done.

“He’s a bit of a character so I’m delighted.

“I’ve always had a big opinion of the horse. I really like the horse. He’s a good horse.

“I had a bit of confidence when Craig took the ride three weeks out (from the race).

“When you draw (barrier) 16 you need a bit of luck, but we got a good run today.

“It’s bene a while between our Group 1 wins.

“He’s got a great pedigree…hopefully we find a home somewhere for him.”