Just when it looked like the Prelude winner Alligator Blood was home again, a flashing late run down the outside from the Anthony Freedman-trained Super Seth saw the Dundeel colt get up to win the 2019 Ladbrokes Caulfield Guineas. 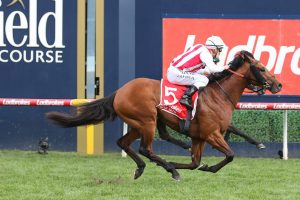 Sunshine Coast trainer David Vandyke was likely cheering with his previously undefeated All Too Hard gelding Alligator Blood ($5) getting to the front and charging home in the final 50m of the Group 1 $2 million Ladbrokes Caulfield Guineas (1600m).

Super Seth ($7.50), fifth last time out during a luckless run behind the Queensland-trained winner in the Prelude, absolutely flew home in the dying stages of the three-years-old classic to score the short half-head win in a photo.

Alligator Blood’s jockey Ryan Maloney gave his mount a brilliant ride and would have been gutted going past the post second after the Guineas looked done and dusted.

It was a generous tempo in the Ladbrokes Caulfield Guineas this spring as the David Jolly-trained Roccabascerana led the field around.

Alligator Blood tracked second on the outside, while the Prelude third placegetter Groundswell ($13) for Anthony Freedman getting into the Group 1 as an emergency was also on pace in third just ahead of the favourite Dalasan ($3.60).

Aside from the fast finishing winner from the back Super Seth, it was on speed runners Alligator Blood and stablemate of the winner Groundswell in the trifecta, while Dalasan crossed 3.6 lengths away fifth as the beaten favourite.

“The plan’s all come together. He’s still learning so the sky’s the limit.”

Freedman was also pleased to see Super Seth put it all together in his spring Grand Final, proving he could run out the 1600m distance ahead of a return next autumn.

“He’s taken quite a bit of work to get him here it doesn’t come naturally to him he’s  bit goofy and he does a few things wrong,” Freedman said.

“He was strong late. He’s a horse with a good future.

“I wasn’t convinced he’d run a mile I must be honest.

“Thought he might end up back the Coolmore (over 1200m at Flemington on November 2).

“The target was always to try and win a stallion race with him.

“He had a good two-year-old prep and he came back well, but he needed to lift to win today and I think the winkers obviously did that.

“I would doubt it (that he’ll race again this spring).

“He’ll go for a break and concentrate on the autumn.”