The punters have eased a little on the 2019 Thousand Guineas betting favourite Flit to get the job done in the big one for the fillies on Saturday at Caulfield despite the early scratching of Affair To Remember from the line-up. 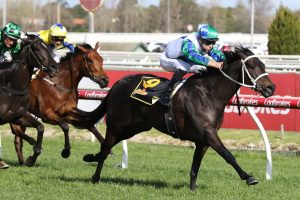 There are only 10 three-year-old fillies remaining for this year’s Group 1 $1 million Schweppes Thousand Guineas (1600m) after Ballarat horseman Dan O’Sullivan withdrew his roughie hope Affair To Remember (9) from the million dollar showdown.

The latest Thousand Guineas odds at Ladbrokes.com.au have four of the hopefuls under $10 for the win including the clear but drifting favourite Flit ($2.10 out to $2.40) in gate two.

Jockey Hugh Bowman partners the Godolphin-raced daughter of Medaglia D’Oro, the hoop after his second win in the classic after his 2014 success aboard Amicus.

Flit resumed with a second to Libertini in the Group 2 Silver Shadow Stakes (1200m) before her luckless ninth when hampered by a wide barrier 15 of 15 draw in the Group 2 Thousand Guineas Prelude (1400m).

The bookies are happy to rule a line through that performance and have Flit back on top to atone from a better barrier (2) in a smaller field over more distance this weekend.

Bowman was forced back to last in the run in the Prelude on Flit, who was also badly blocked for a run in the straight and never a winning hope.

Cummings is confident the jockey – of Winx fame – can get a better go on the weekend and said instructions would be for her to settle closer up on the speed.

“She drew out in her first-up run and then she also drew out in the bigger field in Prelude – we really rode her to take our medicine early in both those races,” Cummings told Racenet this week.

“I think up to the mile with her speed and the way she is feeling I wouldn’t be surprised to see her land a couple of lengths closer.

“A little bit closer wouldn’t surprise anybody from the gate.

“Hugh was just an inch off getting out on her last time but in retrospect it’s really brought her forward.

“That was only her second-up run with over a month between runs going into that Prelude.

“This time from the gate she gets her opportunity to put herself right into it.”

Cummings also hasn’t ruled out a shot at the Group 1 $5 million Ladbrokes Cox Plate (2040m) with Flit at The Valley on October 26, but said the team were taking it one race at a time with the untapped filly.

“We have kept her in the (Cox Plate) acceptances but we don’t need to rush that at the moment,” Cummings said.

“I just think that on Saturday it will be exciting to see her at the mile at the first time.

“I think you will see her coat is now better and physically she has come on.”

The Lonhro filly – also representing Godolphin along with the Cummings-trained Flit and Tenley ($12) – was also third in the Group 1 Golden Slipper (1200m) during an ace two-year-old season.

She has failed to win this prep as a three-year-old and was another of the hard-luck stories out of the Prelude when seventh from barrier 12 in a race that suited the on-pace runners.

The Prelude winner Acting ($9.50) chasing her fourth win on the trot and the Peter & Paul Snowden-trained Missile Mantra ($9.50) who has an eye-catching turn of foot suited to going up to the mile round out the single-figure Thousand Guineas fancies this spring.