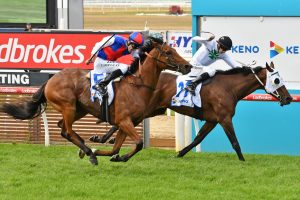 The mile and a half feature has attracted a 15-horse field this season with the latest 2019 Herbert Power Stakes odds through Ladbrokes.com.au dominated by Steel Prince ($3.70).

Anthony Freedman’s Nataniel six-year-old is yet to run worse than second from his six runs over 2400m (6:3-3-0) and chases his first win since the Listed Andrew Ramsden Stakes (2800m) back in late May.

The form of that race was franked last Saturday when the narrow runner-up Surprise Baby took out the Group 3 The Bart Cummings (2520m) second-up getting a ballot free ride into the Group 1 $8 million Melbourne Cup (3200m).

The horse currently sits 36th on the Caulfield Cup order of entry following third acceptances for the classic on Tuesday with 53kg and is at $41 all-in odds for the Group 1 through Ladbrokes.com.au.

Two of the runners in the Herbert Power Stakes field are already guaranteed a spot in the 18-starter Caulfield Cup field should they run on the quick back-up with Self Sense and Qafila third and 15th on the ballot order respectively.

The David Brideoake-trained Self Sense has a wide barrier 14 of 15 draw for the Herbert Power getting in on 54.5kg with Luke Nolen – of Black Caviar fame – aboard the $101 roughie.

Lindsay Park’s mare Qafila is at much shorter Ladbrokes Herbert Power Stakes odds of $14 as the four-year-old daughter of Not A Single Doubt chases her first win since the Group 1 SA Derby (2500m) in May.

Along with Steel Prince, there are four other single-figure hopes to win the Ladbrokes Herbert Power Stakes including last year’s third placegetter Prince Of Arran ($8).

The Charlie Fellowes-trained UK raider also ran third in Melbourne Cup trifecta in 2018 and is first-up here back down under in a winnable race.

Auckland Cup winning Kiwi mare Glory Days who finished third in the autumn’s Sydney Cup over the two miles and Michael Moroney’s last start Benalla Gold Cup winner Hang Man follow in the markets at an equal $8.50, before The Chosen One ($9.50).

Another New Zealand-trained hopeful in the mix, Savabeel four-year-old The Chosen One represents Murray Baker & Andrew Forsman and is out to improve on a lead-up ninth in the Group 1 Underwood Stakes (1800m) when four lengths beaten by the 100/1 winner Black Heart Bart.

The entire is back out over 2400m for the first time since his fourth in the Group 1 ATC Derby (2400m) in Sydney over the autumn and looks a genuine Each Way chance here with Damian Lane aboard.

“He will wear blinkers and a tongue control bit. In the parade ring (last start) he was just getting his tongue back and over the bit,” co-trainer Baker told the NZ Racing Desk.

“He didn’t race with his tongue over the bit. They did the bridle up a bit tighter and it seemed to be okay during the run. But it is something we are trying to eliminate.

“He has raced with blinkers before in New Zealand, so we have put the blinkers back on him and hopefully that sharpens him up because we were a little bit disappointed the other day.

“He had every possible chance to join in and do something. We have to be a little bit forgiving. He was second up in his four-year-old campaign at weight-for-age and I am sure he is better than what he showed and I think he is capable of being a weight-for-age horse in time.

“Back to a handicap, he looks very well placed.”