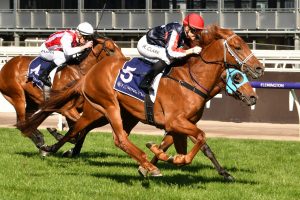 The consistent chestnut is one of 16 confirmed starters, plus three emergency runners, accepted for the Group 1 $2 million Ladbrokes Caulfield Guineas (1600m) field this spring.

After winning his opening two starts this prep, including the Group 2 Danehill Stakes (1200m) at Flemington, Dalasan suffered a loss when running second as the beaten favourite in the Group 3 Caulfield Guineas Prelude (1400m) on September 29.

He finished three-quarters of a length off the upset winner Alligator Blood who scored his fifth win from as many career starts in the event.

The two clash again in the big one this weekend, Dalasan tipped to turn the tables heading Caulfield Guineas betting at $3.10 through Ladbrokes.com.au.

Dalasan is also the early market mover having firmed from opening odds of $3.40, despite drawing barrier 18 (into 15) in the Caulfield Guineas field.

Jockey Hugh Bowman is down to ride the favourite for the first time, the hoop after his second Caulfield Guineas victory following that on Press Statement for Chris Waller in 2015.

In an omen for the punters, Press Statement is the only Caulfield Guineas winner in the past decade to jump from a double-figure barrier.

Bowman replaces Raquel Clark aboard Dalasan with the young horse also donning blinkers for the first time in the stallion-making race.

“He (Bowman) was very happy with the way he worked (on Tuesday),” co-trainer Leon Macdonald told RSN 927 this week.

“There was a toss-up whether we put blinkers on him or not because of going into a race like this.

“It was a tough call (to change jockeys). She (Clark) does all the work on him. All I can say is she’ll be back.

“Raquel had a bit of trouble with him in the straight (last start) – and it was more him than her I’ve got to say that – and I just thought with a strong, aggressive rider on him, he’d be better suited.”

Alligator Blood is also in double-digits with barrier 13, which will become gate 11 with the emergencies out on Saturday.

The undefeated son of All Too Hard is out to emulate his sire who won the Caulfield Guineas in 2012 before a second in that year’s Cox Plate.

Prepared on the Sunshine Coast in Queensland by David Vandyke, Alligator Blood made a huge jump in grade winning the Prelude last time out and has jockey Ryan Maloney continuing associations on Saturday.

Alligator Blood is at current Caulfield Guineas odds of $5.50, sitting just ahead of Kubrick ($7.50) who rounds out the single-figure fancies in the event this season.

Also drawn wide in barrier 17 (into 14), Kubrick is looking to continue the outstanding form of his trainer Waller who won all four Group 1 races in Sydney and Melbourne last Saturday.

The well-bred Shooting To Win colt gets back up to a mile for the first time since his Group 1 JJ Atkins (1600m) second as a juvenile in the winter up in Brisbane and is third-up on the weekend.

He resumed with a Run To The Rose fourth before finishing fifth to the winner Bivouac in the Group 1 Golden Rose Stakes (1400m) on September 28.

Also out of a Sydney form line is the Godolphin-raced Subedar in barrier seven, the James Cummings-trained son of Sepoy runner-up in the Group 3 Gloaming Stakes (1800m) on Golden Rose Day.

Subedar drops back in distance off that run having been beaten 3.3 lengths by the winner Shadow Hero and looks a genuine hope over the mile at $13 odds.

Others around that price to win this year’s Caulfield Guineas include Super Seth ($11) out to improve on a fifth in the Prelude and The Holy One ($18).

The current odds on The Holy One look value with the Trent Busuttin & Natalie Young-trained galloper having won three of his four latest starts.

He was impressive last time out winning the Group 2 Stutt Stakes (1600m) over the mile at The Valley, which produced the upset 2017 Caulfield Guineas winner Mighty Boss (4th).