Official barriers for this Saturday’s Group 1 Thousand Guineas (1600m) were announced on Tuesday with Godolphin landing a strong hand of inside chances.

Race-favourite Flit drew favourably with barrier 2, while stablemate Lyre will be alongside in gate 3.

“Flit is hard to go past I’d say. Her run the other day was full of merit, as I’m sure has been widely documented,” Makiv told Racing.com. 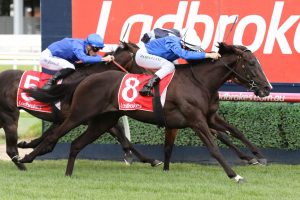 The market remains relatively unchanged following the barrier draw. Flit was installed as the early favourite in Thousand Guineas betting after flashing home late for second in last month’s Group 2 Silver Shadow Stakes, and Makiv thinks we should see plenty of the same energy from his lightly raced filly on Saturday.

“James (Cummings) prefers a lot of stored energy, she didn’t have a taxing run. She worked beautifully here this morning and she’s ready to go, so I’d say she’s deserved favourite,” Makiv went on to say.

Lyre, meanwhile, always looked headed to the Thousand Guineas field after winning the Blue Diamond Stakes back in February. The three-year-old by Lonhro hasn’t featured in the winners’ circle since but has still shown signs of improvement.

“She’s coming along really well, she’s been improving in her preparation the whole time. A slight query at the mile, so to draw a nice gate like that she won’t have to do any work,” co-trainer Sam Freedman said of Lyre on Tuesday.

“The last week she’s really been thriving, her coats nearly come to herself. She’s going well. She’s a real grand final sort of horse if you target a race with her. She’s a third and fourth up sort of horse so she should be very competitive if she sees out the mile strong.”

Also stepping up to the mile this weekend is Tenley, making up another contingent of the Godolphin stable with the blinkers on.

Tenley failed to fire in the Guineas Prelude a fortnight ago and will now step up in class to Group 1 level for the third time in her career.

“I spoke to James this morning and he’s really happy with the way she’s come through her last run. Her best run has been with the blinkers, so I expect she’ll run pretty well,” Freedman said.

Flit ($2.20) occupies the first line of Thousand Guineas betting at Ladbrokes.com.au while Lyre ($6.00) can be found below.

Acting, who looks to become just the third horse and the first since Irish Lights in 2009 to complete the Prelude-Thousand Guineas double, can be found on the third line of betting at $10.00.