Chris Waller capped off an incredible day at Randwick on Saturday as the five-year-old Come Play With Me claimed the Group 1 The Metropolitan (2400m) at a handy price.

The win meant Waller had won all four Group 1 races across Flemington and Randwick on the day, while punters on board the $8.50 chance in The Metropolitan 2019 also came away cheering.

Jockey Brenton Avdulla rode brilliantly in the 14-horse field tucking in third on the rails at the final turn. The pair shifted to the middle portion of the track over the final furlong and found the line strongly to beat home Gallic Chieftain, who ran on gallantly for second. 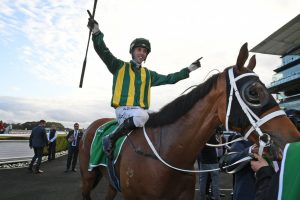 Come Play With Me is now a Group 1 winner after a gutsy run to claim the time-honoured Metropolitan on Saturday. Photo Credit: Steve Hart.

“I thought this was the horse I wanted to ride with the weights, I was very lucky to have Chris [Waller] put me on him,” Avdulla said after the race.

“Things didn’t go right pre-race, he jumped and was a pair further back than I wanted to be, I knew I couldn’t go around them to win it,  so I just had to ride through them.

“He was there to win the race half way up the straight and Tommy [Gallic Chieftain] put a margin on him, but to his credit he kicked back and fought on.”

Come Play With Me was third-up on Saturday after running third in the Group 3 Kington Town Stakes (2000m) a fortnight ago. The talented stayer won four straight races in his last campaign across Ascot and Belmont, but still failed to attract any kind of attention in the market.

Stampede was the race-favourite on Saturday but only managed to run fourth. Gallic Chieftain’s brave effort in the late goings certainly caught the eye, while Sir Charles Road wasn’t disgraced either placing third at double-digit odds.